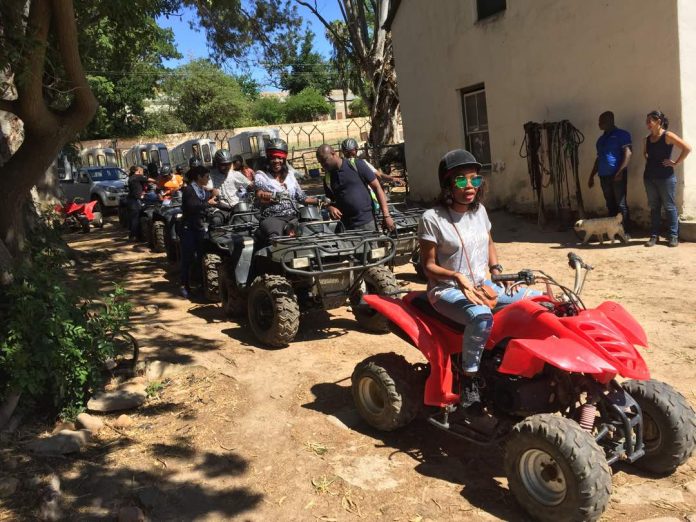 After three amazing nights in the Free State, together with the other members of the 2017 SA Specialist experience, we made a three hour road trip to Bloemfontein to catch a flight to the “Mother City”, a more commonly used nickname for Cape Town by locals.

Cape Town, which happens to be the oldest town in South Africa, is a port city that is situated on the country’s southwest coast and positioned on a peninsula just beneath the magnificent, imposing and popular Table Mountain.

After an hour and forty minute flight, we arrived in Cape Town and were welcomed in a grand but an unusual manner. Over thirty of the world’s most iconic bike brand, Harley Davidson together with professional riders lined up just outside of the arrival area of the airport waiting for us to hit town.

Cape Town has its own vibe – from the weather, mood to the people. Arriving from Clarens, it was in fact very obvious and effortless to try and identify the differences. Cape Town has a lot to offer tourists on any day and even for people who have preciously visited the “Mother City”, it is always a totally new experience when they return to the city.

From the airport, we rode through the principal streets of Cape Town for almost an hour before settling at the Victoria & Alfred (V&A) Waterfront for a series of fun activities. From a good spot, you could see slowly rotating cable cars climb to the mountain’s flat top, a sweeping views of the city, the busy harbor and boats. After all the fun on the day, we checked into the five-star Westin Grand hotel, next to the Cape Town Conventional Centre. 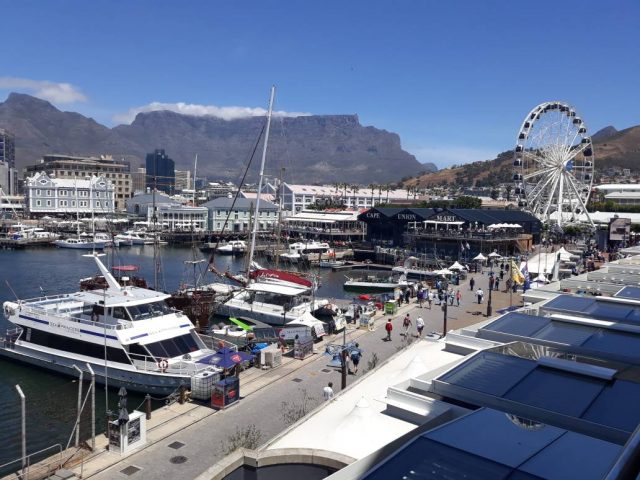 Designed by Adrian van der Vyver, the V&A Waterfront is a complex situated on the Atlantic shore, Table Bay Harbour. The 123 hectares (300 acres) area has been developed for mixed-use, with both residential and commercial real estate. The complex houses over 450 retail outlets, including fashion, homeware and curios, to jewellery, leather goods and audio-visual equipment. The V&A Waterfront still functions as a working harbour and fishing boats bring in fresh fish, and larger container ships are towed in by tugboats.

One of the major attractions at the V&A Waterfront is the Two Oceans Aquarium. There are over 3,000 new fishy friends who are swimming to meet your acquaintance such as, sharks, fishes, turtles and penguins. The aquarium raises environmental awareness through high-quality exhibits, conservation and education programs. The more fearless you are, you can attempt to do a shark dive in the I & J Predator Exhibit.

The Wheel of Excellence is another spectacle at the complex. You can get into the skies in one of the 36 fully-enclosed cabins on this 50m high, giant observation wheel (for R70/p). The 20 minute journey affords panoramic views of Cape Town, Paarl, Table Mountain and Robben Island. Feeling a bit flash, you can opt for a VIP cabin, complete with canapés and champagne for a true VIP treatment.

Cape Town caters for the nature lovers as much as the culture enthusiast and the hop-on hop-off bus tour is a great start. The tour grants you flexibility to explore the city according to your own itinerary for an inspiring introductory scene of Cape Town. At the foot of the Table Mountain sits Kirstenbosch Botanical Gardens, one of the nine national botanical gardens covering five of the South Africa’s six different biomes.

History buffs can head to the Castle of Good Hope to discover the oldest surviving colonial building in South Africa which was constructed in 1666 as a maritime replenishment stadium. Currently, the star shaped structure houses the Castle Military Museum and the Iziko Museum of Cape Town.
Quad Biking also happens in Cape Town and I experienced the mountain trails. The quad bike trails take you through some of the rarest plants on earth and the off road quad tours are perfectly designed for those with a sense of adventure and an appreciation for nature. A qualified field guide leads the quad biking tour group, offering interesting insights as you enjoy your off road quad bike trail through the awesome scenery of this Western Cape region.

A visit to Cape Town is not complete without visiting a winery to have a wine tasting experience. Cape Town is a favourite destination for wine connoisseurs from around the world with some of the best and oldest wine farms in the region can be found right in the city’s back yard. Cape Town is a world renowned wine region, recognized internationally for its fine wines. While the Cape’s famed winelands have spread to Stellenbosch, Paarl, Franschhoek and beyond, it all began in Constantia, quite literally Cape Town’s back yard. With a wine-making tradition that spans more than 300 years, the Constantia Valley is the oldest wine-producing region in the Southern Hemisphere, its picturesque farms still produces world class and award-winning wines.

Our adventure came to an end at the Cool Runnings Toboggan Family Park. Being the only toboggan track in Africa, Cool Runnings comes with its sunny skies and warm temperatures. The toboggans definitely don’t run on the traditional snow and ice, Instead, Cool Runnings toboggans run on a stainless steel track, each seating one or two people. Your ride starts with a pull up a steep grassy slope by a hook at the bottom of your toboggan.

From there, your sled is released and you will go down the track with seventeen corners, S-bends and a tunnel. You can control your own speed with a break, but adrenaline junkies can easily reach up to a whopping 40km an hour. The sled will automatically slow down as it comes into the docking station, so you have nothing to worry about except having a good time.