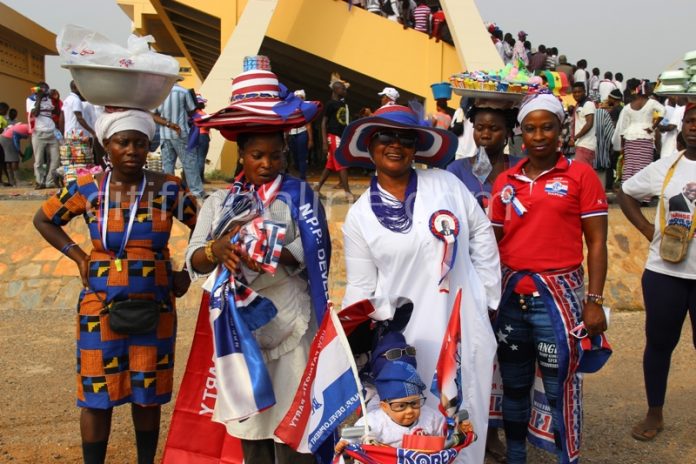 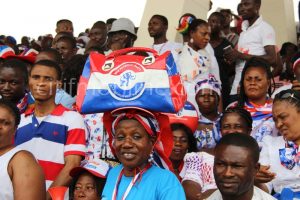 Clad in Party T-shirts and other paraphernalia’s, the jubilant supporters chanted slogans of the NPP amidst singing, dancing, blowing of vuvuzelas’s and tooting of car horns.

From loud speakers set on the pavements, music boomed in the background for those who wanted to dance, with the sensational Campaign songs of ‘Onaapo’, and ‘Mahama dey bee’ being the most received.

Some of the supporters of the party, riding motor bikes decorated in NPP colours, demonstrated their acrobatic skills from the Ghana News Agency (GNA) road through to the Headquarters of the Customs Division of the Ghana Revenue Service to the Black star Square.

The GNA sighted a middle-aged man, and a woman obviously in her 40s, dressed in a school uniform to portray the NPP’s Free Education Policy.

Traders took advantage of the ceremony to sell party paraphernalia, including handkerchiefs, NPP calendars, wallets, caps, hats, slippers, watches, scarves, whistles and vuvuzelas among others, which flooded the pavements at the Black Star Square.

Ms Yaa Serwaa, a trader in slippers, beads, band and wrist watches, in an interview with the GNA, said she came from Kumasi to support Nana Addo and do business.

Her products were priced between GH₵1 and GH ₵20 and the patronage was good, she said.

Mr Emmanuel Tettey Coffie, a supporter, who had decorated his horse in NPP colours, marched through the streets, whilst other party supporters sat on the horse to take pictures.