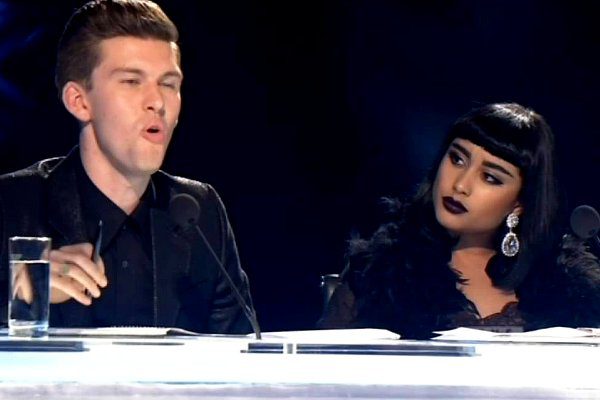 Two judges on New Zealand?s ?The X Factor? might have made the nastiest comments on the show ever. Natalia Kills and Willy Moon, a husband-wife duo of aspiring pop artists, berated contestant Joe Irvine on the show Saturday night, March 14 for wearing a suit and sporting a slicked-back hair which they claimed as Moon?s signature style. @jooe63_joe lorde sent me cupcakes I thank u so much I love them pic.twitter.com/11kFEoVqwn

?I?m just going to state the obvious: we have a doppelganger in our midst,? said Kills, who is a British pop artist/model/designer. ?As an artist who respects creative integrity and intellectual property, I am disgusted at how much you have copied my husband.? She continued her rant despite being booed by the audience, ?You?re a laughing stock. It?s cheesy. It?s disgusting. I personally found it absolutely artistically atrocious. I am embarrassed to be sitting here in your presence having to even dignify you with an answer of my opinion.?

Her husband Moon, whose 2012 single ?Yeah Yeah? was used in an Apple iPod television commercial, followed it with a meaner comment. ?It?s like Norman Bates dressing up in his mother?s clothing,? he said. ?It?s just a little bit creepy and I feel like you?re going to stitch someone?s skin to your face and then kill everyone in the audience.?

Trying to defend Irvine, Melanie Blatt who is also the show?s judge said to the singing hopeful, ?Actually?you?re dressed better than [Kills?] husband.? The former member of All Saints added, ?You know what Joe? I don?t think many people have believed in you in your life, but I tell you right now I believe in you.?

After the video went viral, TV3 which airs the show said it received ?a huge amount of feedback about comments made by our judges,? and it had reportedly come under ?extreme pressure? from sponsors to fire the pair following their tirade.

Later on Sunday, less than 24 hours after the taping, Kills and Moon were fired. Mark Weldon, the CEO of Mediaworks which owns New Zealand?s TV3, said in a statement, ?We no longer have confidence that Kills and Moon are the right people to perform the role of ?The X Factor? judges, and they will leave the show, effective immediately.?

Irvine has since received many support from people, including singers Lorde and Ed Sheeran. Lorde sent Irvine cupcakes and a handwritten note. ?Just wanted to say: your individuality, positive energy and spirit are infectious!? the ?Royals? singer wrote. ?I think you?re doing on awesome job on the show so far.? She added, ?I?m a performer too and I wanted to say that no matter how many people make fun of me for how I dress, move and act, I?m being me ? and that?s what?s important. Good luck and lots of love, Lorde.?

Irvine thanked Lorde, posting on Twitter, ?Hey you are awesome I love ur music and wanna meet you thank you so much for the cupcakes xo.?

British singer/songwriter Sheeran, meanwhile, posted via his own Twitter account, ?@jooe63_joe don?t worry about what anyone else says man. Enjoy yourself with it, that?s what singing is about, not what other people think.?