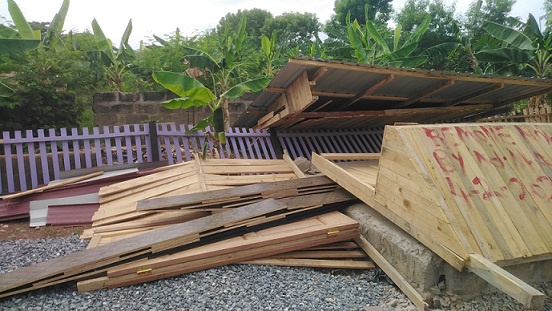 Judgment Debt is said to be starring on the faces of the Municipal Chief Executive Officer for the Adentan Municipality in person and the Assembly as an entity for an unlawful demolition exercise it undertook within the Gbantaana Electoral Area.

On the 11th day of February, 2021, guards of the Municipal Assembly went and demolished a temporary structure located on a piece of land which belongs to the Adenta Community School Complex.

Todaygh.com’s investigation reveals that the Assembly actually gave the owner of the property one Daniel Anomah, an enterpreneur and a football agent a permit to placed his temporal structure on a portion of the school land which has been lying fallow about eight months ago.

Speaking in an interview with the investigative team, at the site where the demolition took place, Mr Anomah said he was in shocked and couldn’t believe what he saw at the site few hours after leaving the office of the MCE where he shown his documents of proof.

“I was asked to go to the Municipal Assembly to acquire permit to put up the temporal structure after discussion and agreement with the school heads (primary and JHS) which I obliged.

Officials from the Gbantaana Zonal Council came and inspected the place to see if it was suitable for the kind of business (Food joint) I wanted to operate before I was issued the permit” he disclosed.

Mr Anomah revealed that the MCE visited the site after he has finished putting up the structure and fortunately he (Anomah) was there so he was invited by the MCE to his office on that same day but couldn’t make it but went to the office of the MCE the next day.

“I spent almost the whole day at his office without seeing him. I was told by his secretary to leave my telephone numbers behind and go home but she reach out to me when the MCE is in which I did.

Surprisingly I had a call from a good Samaritan who informed me that portions of my property had been destroyed by some guys believe to come from the AdMA on 2nd February 2021.

I went back to the MCE’s office and met him this time, he denied knowledge of the demolition after I have showed him all my documents” he added.

Our investigation revealed that the Municipal guards went to site on February 2, 2021 to destroy the block and wooden fence wall before they come to write notice of removal on the 4th of February 2021.

The Municipal guards went to demolitioned the entire structure on the 12th of February, 2021 without recourse to law.

The place where the structure was demolished was turned into a dumpling site and public place convenience (open defecation) but such bad practices which has negative health issues on the pupils of the school has stopped due to the presence of Mr Anomah on site.

Meanwhile Mr Anomah (plaintiff) through his lawyer has written to the Adentan Municipal Assembly declaring his intention to sue the MCE, the Works Engineer and the Assembly as an entity for an unlawful demolition of property worth thousands of Ghana Cedis.

According to the counsel for the plaintiff, lawyer Oliver K. Nornyibey, his client has certified the legal requirements which enables him to sue the Assembly.

“The assembly has been duly served a written notice of my client’s intention to sue them as required by Section 210 (1) of the Local Government Act, 2016 (Act 936).

“A suit shall not be commenced against a District Assembly until at least one month after a written notice of intention to commence the suit has been served on the District assembly by the intending plaintiff or agent of the plaintiff.” – Section 210 (1) of the Local Government Act 2016, Act 936.

Lawyer Nornyibey has however debunked claims that his client was selling alcoholic beverages on a school hence the unlawful demolition exercise that took place on the 12th of February 2021.

“This claim of selling alcoholic beverages is untrue because the place is still under construction. So where is he selling what they claimed he was selling” he enquired.

“Look handreds and thousands of people have surfered this kind of injustice at the hands of state institutions which have to serve the interests of the masses.

We are going to test this classic case in the Court of law to ensure that such injustices are addressed.” lawyer Nornyibey hinted.

Mr Anomah’s case is one of the many case which occurs daily in our society which are not reported on. Someone have to take the lead in the fight against this injustices perpetrated by some Assemblies and its officials. He stated.

Illegal buildings on water course, and other unauthorized areas are still standing yet structures with genuine permit are been demolished what can society are we building. Lawyer Nornyibey quizzed.

Find below documents showing authorization by AdMA allowing Mr Anomah to put his structure on the portion of the school land.