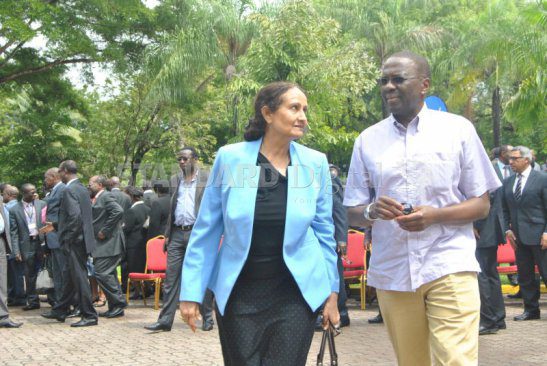 Dr Mutunga also told off judges and magistrates faulting the Judicial Service Commission (JSC) over its alleged interference with the courts? independence saying JSC ?will not flinch in acting tough on integrity concerns.?

The CJ, who is also the Supreme Court President, said corruption had returned to the Judiciary even after vetting of judicial officers since 2010.

Monday, the CJ said the increasing number of complaints over malpractices involving some judges and magistrates was worrying.

?The radical surgery and vetting exercises were traumatising experiences for most of the judges. But if we do not take a personal and professional stand against this vice (bribery), then I can assure you the vetting exercise will be back ? and this time, in a more vicious form than the previous one,? warned Mutunga.

The CJ was addressing judges at Whitesands Hotel in Mombasa Monday during the official opening of the annual judges? colloquium which was also addressed by Deputy Chief Justice Kalpana Rawal and Court of Appeal President Justice Kihara Kariuki.

They called on judges to uphold integrity and ethics and asked different divisions of courts to foster collaboration to bolster public confidence on the Judiciary.

?JSC takes no pleasure in subjecting judges to disciplinary processes but will not flinch in acting tough on these integrity concerns. The JSC is most perturbed by the number of complaints against judges and magistrates,? said Dr Mutunga.

He said that JSC had a constitutional duty to act on public complaints and that it shall remain true to that mandate and exercise it in a fair and proper manner.

?I have never understood why a judge, who is very well paid, enjoys security of tenure, has highly concessionary mortgage and car loan facilities, has an excellent medical cover, has probably had a previously successful career as an advocate or scholar of over a decade, should indulge in a practice so demeaning at both professional and personal level,? he said

Judges are in Mombasa to evaluate how the Judiciary has interpreted several aspects of the Constitution and other rulings in the last five years since the inauguration of the 2010 constitution.

?It has been an exciting fulfilling journey nevertheless. As an institution, we have been lauded, perhaps more criticised than lauded.  But it is also true to say that the five-year period has seen remarkable successes and sound jurisprudence emanating from the Bench,? said Lady Justice Rawal.

She said the rising insecurity in the country had brought to fore questions regarding the role of the judicial institution in addressing the transnational crimes against the backdrop of a vibrant bill of rights.

Dr Mutunga, however, said that JSC also has a duty to protect judges from petty harassment to protect the independence of the Judiciary but added that it would not protect judicial officers from complaints that have merit such as delayed rulings, absenteeism, and laziness.

By Benard Sanga, The Standard