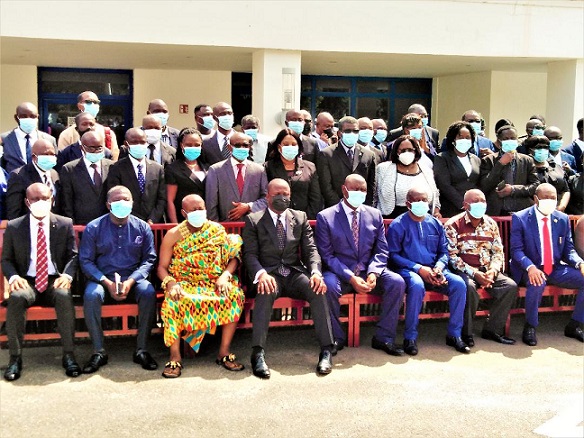 The Judiciary has affirmed its commitment to partnering with the government for the successful execution of the national campaign against illegal mining in all its forms.

Chief Justice Kwasi Anin Yeboah said “the Ghanaian Judiciary will do its best to discharge the responsibilities in this existential battle.

“We will do all in our power to help the nation win this fight. And we will partner with any agency of the state that is ready to work with us to achieve the needed results,” he emphasized.

The programme, being held under the auspices of the Minerals Commission and the Judicial Service of Ghana, is to build the capacity of judges to interpret the more technical provisions of the law guiding mining in Ghana.

In all, 32 judges and magistrates drawn from mining areas across the country are taking part in the training workshop.

Chief Justice Anin Yeboah drew attention to the fact that the laws of the nation ought to reign supreme above all other parochial interests.

“We are a nation of laws. That is something that I believe we are all proud of.

“Which means that when aberrant conduct such as this arises, it is the law that we must turn to not self-help,” the Chief Justice noted.

He expressed worry at the wanton destruction of the ecosystem mainly through illegal mining and other unhealthy environmental practices.

“Not only is it depriving the nation of its rightful due from the exploitation of its resources, but it is also exacting an incalculable toll on our environment,” he said.

The Chief Justice further expressed concern about how the output of farmers, whose activities were dependent on the land, had been affected.

“Think of the parents who, according to a troubling report recently published, are giving birth to children with various genetic challenges owing to this menace,” he observed.

Mr Samuel Abu Jinapor, Minister of Land and Natural Resources, was hopeful the workshop would help bridge the knowledge gap between the mining sector and the judiciary.

This, according to him, would lead to the emergence of robust judgments from the various courts relating to mining offences.

The Minister said the urgency to deal with the negative impact of illegal small-scale mining and the need to garner multi-stakeholder collaboration had prompted the government to come out with several measures.

The measures included a freeze on the issuance of forest entry permits by the Forestry Commission for purposes of mining, the designation of forest reserves and water bodies as red zones and decentralization of the enforcement mechanism.

He also cited the ‘Green Ghana Project’, which sought to plant an initial five million trees in a day across the country.