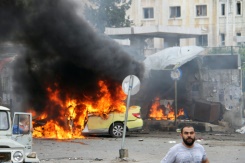 DAMASCUS — At least 12 people were killed and many others wounded on Saturday, when twin bombings rocked a predominantly-Shiite district south of the capital Damascus, a military source told Xinhua. (Syria-Bombings-Shiite)
– – – –
RABAT — Morocco’s Bank Al-Maghrib (Central Bank) and China Banking Regulatory Commission signed here on Saturday a memorandum of understanding (MoU) on banking control, information sharing and general cooperation. (Morocco-China-MoU)
– – – –
FALLUJAH, Iraq — Iraqi security forces on Saturday tightened their grip around the city of Fallujah and freed some areas from Islamic State militants after fierce clashes, a security source said. (Iraq-IS-Fallujah)
– – – –
ISTANBUL — Turkey has been diligently working to expand its influence in Africa, a move to boost its ambitious strategy to emerge as a global actor in the region.
As many as 10 African countries have been visited by top Turkish officials in recent months. (Turkey-Africa-Ties) Enditem