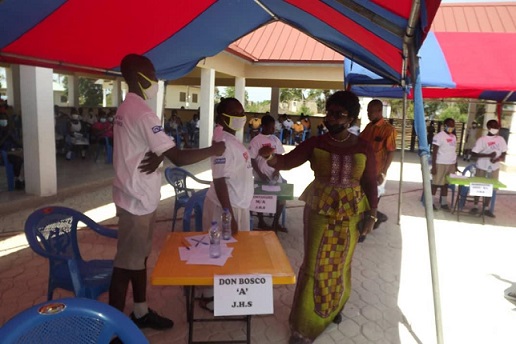 Effutu Municipal Director of Education, Mrs Mabel Judith Micah, has called on stakeholders to be advocates against Sexual and Gender-Based Violence (SGBV) in the society.

She made the call in an address read on her behalf at the opening of the maiden Inter Junior High School (JHS) Quiz completion on SGBVs in the Municipality.

It was organized by Wise Youth Foundation, in collaboration with Central Unit Programme of Plan International-Ghana and Ghana Education Service.

All the 24 public JHS in the area were grouped into three circuits, Central, West and East circuits, to participate in the competition.

It is meant to test and increase the knowledge of the students on SGBV issues, promote risk awareness of SGBV for them to report all forms of SGBVs to their parents and agencies like the Social Welfare, Domestic Violence and Victim Support Unit (DOVVSU), of the Ghana Police Service, Assembly members and traditional authorities.

It is also to educate the public through the schools by creating awareness on the SGBV, it physical, emotional and psychological effects and to remind duty bearers, in particular, the Government sector to ensure that the right of children, young people and women who were usually the victims of SGBV, were respected, protected and safeguarded in all their endeavours.

According to the Director, the Directorate was working assiduously to improve upon academic performance in the municipality and the quiz was part of it.

Mr Eugene Yamoah, Wise Youth Foundation Programme Director, said the foundation is a community-based organization that advocates for the right and well up-binging of children, particularly girls, seek to educate them on adolescent sexuality and also to empower them to make well-informed choices in society.

He thanked Plan-Ghana for its continuous support in the execution of their programmes and expressed the hope that the programme will help the students and the entire people of Effutu to join the fight against SGBVs.

President leaves for Education summit in the UK

Professor Amfo act as Vice Chancellor of University of Ghana