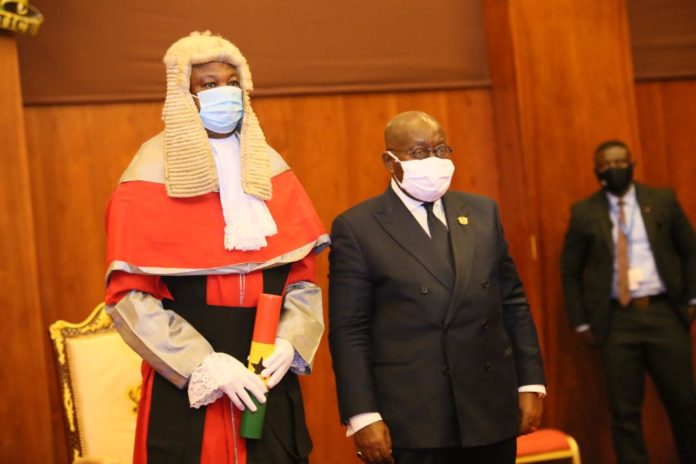 President Nana Addo Dankwa Akufo-Addo has sworn Justice Issifu Omoro Tanko Amadu into office as a Judge of the Supreme Court, with a charge to ensure the strict application of the laws of the land.

At a short ceremony, on Friday at the Jubilee House, Accra, where the President administered the Oaths of Allegiance, Judicial and Secrecy, he urged the judge to help build on the quality of justice delivered by the apex court.

The quality of justice, the President said, had been at an all-time high, however, it was imperative to advance it to sustain the respect and confidence the people had in the Judiciary.

“It is important for you to bear in mind that the growth of our nation demands that we have a judiciary that commands the respect of the people by the quality of the delivery of its justice as well as the comportment of its judges,” the President said.

“The application of the laws of the land must occur, in the words of the judicial oath that you have just taken, without fear of favour, affection nor ill will, and, therefore, without recourse to the political, religious or ethnic affiliation of any citizen of the land”.

The President told Justice Amadu that when anyone fell foul of the Law, the society expected that person to be dealt with, thus the law enforcement agencies and the Judiciary must ensure that that was done.

“That is the true meaning of the concept of equality before the law, and I am confident that you would uphold it,” he said.

Justice Amadu should, therefore, use his time at the Supreme Court to help build a new Ghanaian civilisation, where the rule of law was not a slogan, but an operating principle for the development of the State.

He also indicated that the executive, legislature, judiciary, public sector, security agencies, private sector, political parties, civil society, professional and trade associations, religious bodies, traditional authorities, and ordinary citizens all had the collective responsibility “to work together with our different views and different perspectives for the Ghana Project”.

President Akufo-Addo congratulated Justice Amadu for his appointment to the highest court of the land, saying, “by dint of hard work and merit, you have been further elevated…your appointment is well- deserved”.

“You have met the stringent requirements of the constitution and demonstrated the independence of spirit, proven integrity, high moral character and impartiality of mind to hold office,” he added.

Justice Amadu expressed his gratitude to the President for the honour and privilege to serve in the apex court.

He said he was committed to upholding the Constitution and to “live my judicial oath in the discharge of my duties.”

Until his appointment, Justice Amadu was an Appeals Court Judge. He worked in Nigeria for 19 years and established his law firm in 1997 where he worked until he was appointed to the High Court in 2008.

He was promoted to the Court of Appeal in 2012.