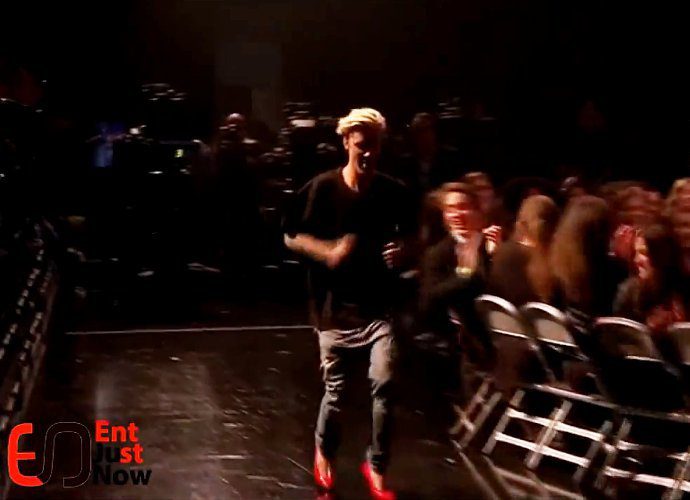 Justin Bieber is up for any challenge including sprint in high heels. In Friday, November 6 episode of British show “Alan Carr: Chatty Man”, the “What Do You Mean?” singer had a sprint against host Alan Carr in high heels.

“I’m going to try to break the record for the first time… a sprint in a pair of high heels,” Alan said to the camera. “The record is 5 seconds.” The 39-year-old comedian then wore a pair of red high heels and prepared to start sprinting. “I can probably beat your time. I’m going to beat your time after you,” Justin told Alan.

After Alan finished his sprint, he challenged the 21-year-old singer, “Try to beat that, Justin.” The singer was very confident that he could beat Alan’s time. He then traded his white shoes for the red high heels. The heels apparently didn’t fit Justin feet well to the point that he said, “All right. I’m going to break my ankles before I…” Alan quickly replied, “Oh my God. Be careful. Be careful.”

Despite the unfit size of the heels, Justin went to sprint. After the singer reached the finish line, Alan announced, “I’ve got the results. I did it in 7 seconds. You, Justin Bieber, did it in… 6 seconds.” Learning of the results, Justin was completely happy, followed by cheer and applause from the audience. He and Alan then did a chest bump.