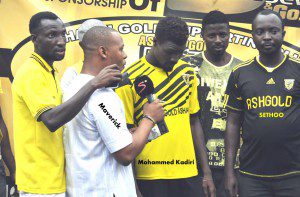 AshGold midfielder Kadiri Mohammed has hailed the capture of experienced goalkeeper Fatau Dauda for another season.

Dauda, who has played for Orlando Pirates and Chippa United in the past returned home last season and helped the Miners win their first ever league title in almost two decades.

Coach Bashiru Hayford’s men face a test of mental strength in the coming season with the double task of retaining their league title and also doing well in the CAF Champions League.

With the quest for both domestic and continental success Kadiri says the fact that they held on to highly rated goalkeeper Fatau Dauda will boost the team.

“I think that the fact that Dauda has decided to stay with us speaks volumes of us,” Kadiri told GHANAsoccernet.com

“We know that the task gets tougher by the day but I think that the team is ready for that.”

Government Suspension of the Ghana School Feeding Programme is Unfortunate

Headteacher appeals for extension of school feeding programme to JHSs