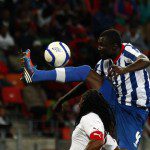 Maritzburg United striker, Mike Mohammed, could well make a big move to Kaizer Chiefs, according to reports in South Africa.

Steve Komphela is reported to be considering bringing the 27-year-old Ghanaian on board after working well together at the Team of Choice.

A source close to the Soweto giants told the Siya crew that Mohammed is on the club?s radar.

?Yes, they haven?t finished signing and Mike could be one of the players coming in,? the source said.

?Now that Rusike is gone they still need another striker and they are looking at bringing the Maritzburg striker to the team.?

The Amakhosi have already brought in two new strikers during the current off-season, in the form of Camaldine Abraw and Bongani Ndulula, while David Zulu joined the club in January.

Many Chiefs fans have been critical of the calibre of strikers that the club has brought in recently and with just six goals last season, Mohammed might not be the player that the Chiefs faithful are looking for.

If Mohammed does sign, he will also be up against the aforementioned trio as well as Bernard Parker and Siphelele Mthembu in the battle for a starting spot.