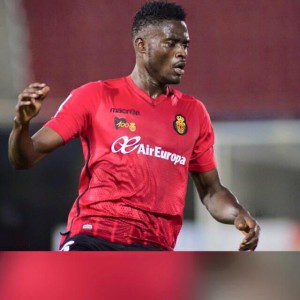 Enterprising Ghanaian international Kasim Adams says he is carving an image for himself at Spanish Segunda side Real Mallorca and not living within the image of any former Ghana star.

The versatile midfielder who sometimes plays as a center back disclosed that his team mates respect him not because he is a Ghanaian but because of his performance.

The former Medeama SC defensive midfielder admitted that even though the exploits of Ghanaian players like Stephen Appiah, Asamoah Gyan and Andre Ayew attracts respect and recognition for upcoming Ghanaian players, but he is carving his own image.

“I came to play in Spain under my own merits.”

“My team mates respect me not only because I’m Ghanaian but because I’m a valued member of the team,” Kasim told Ghanasoccernet.com

“I am and always have been committed and worked hard for every team I’ve played for,” he added.

The 21-year old younger brother of Asante Kotoko defender Ahmed Adams is one the best foreign players for the Mallorca-based club.

Mallorca are currently 18th on the 22-team league table with 20 matches to end the season.

How To Manifest Yourself In The Kingdom Of God – I & II

Eguavoen Confident In Black Stars; Says They Are Not Pushovers