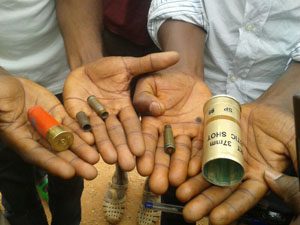 The late Mr Kpalam and his wife Gladys Henanawopeh were attacked last Thursday November 7 at their residence at about 0100 hours by unknown gunmen.

The Ada Divisional Police Commander Chief Superintendent Andrews George told the Ghana News Agency in an interview at Kasseh-Ada in the Greater Accra Region at the weekend that the gun men shot the victim twice in the stomach, leaving him in a critical condition.

Chief Supt. Kumah said Gladys, who was also attacked, was initially rushed to the Ada East District Hospital but had since been transferred to a health facility in Accra.

The Ada Divisional Police Commander explained to the GNA that five persons had been arrested in connection with recent armed robberies in Kasseh.

He urged the residents to assist the Police with information to support their efforts to make the area safe for all.

According to him, the Police would intensify patrols and surveillance to arrest all the culprits, assuring the public that the Police Administration would continue to work in the best interest of the people.

“Last night, we organised ourselves and mounted a serious operation which led to the arrest of five suspects. As I’m speaking, we have sent them to the regional command for interrogations. For security reasons, I cannot disclose their identities, but there are more outside there which we are chasing,” he said.

He said, intelligence gathered indicated that some of the robbers fled to Ashaiman.

“We are not going to rest until those who were mentioned as suspected perpetrators of this heinous crime are arrested. We are embarking on the operation to its logical conclusion,” he said.

He admitted the fact that Kasseh had been under attack for some time now and asked the public to help the Police make the market town safer.

“We are appealing to the general public to volunteer information since that is the tool we work with. We know that people have the information but they are afraid of being exposed.

“We are with the public and I assure you that we will make sure that all criminal elements within the communities are arrested. The safety of the people are our concern and business and we will continue that path,” he said.

Meanwhile, after the indigenes lauded the efforts of the Police for the arrest of five suspects, they were unsure about their prosecution.

Answering that question, Mr. Kumah told the GNA that the Police had 48 hours to provide evidence to prosecute a suspect and called for information.

For the past four months Kasseh and its environs had come under armed robbery attacks creating fear and anxiety among residents.