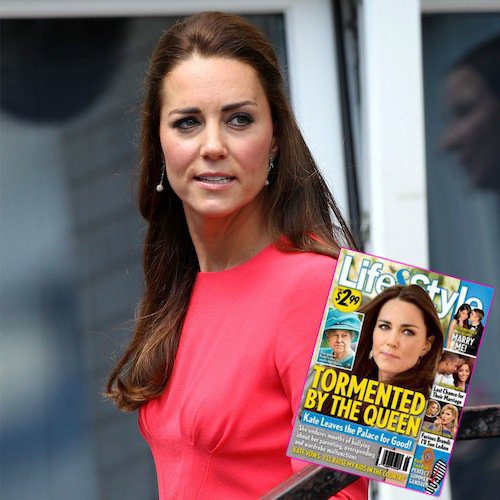 Kate Middleton is feeling the wrath of her powerful in-laws! In the new issue of Life & Style Weekly sources reveal that tensions are at an all-time high ? and the royals have nastily dubbed Prince William?s bride ?Lazy Katie,? and the queen has even privately called her ?Duchess of Do-Little.? According to the source, Queen Elizabeth II was furious that her grandson?s wife made time to attend Wimbledon and meet with Brad and Angelina, but couldn?t spare a moment to meet with her country?s veterans.

Palace sources confided, and Royal Air Force officials confirmed, that Kate had planned to skip a July 10 lunch in honor of World War II pilots attended by William and other royals. That was just two days after her Wimbledon courtside appearance and two weeks after Kate hosted Brad and Angie at Kensington Palace.

?Kate is getting a bit of a reputation for ducking out of royal duties,? the insider tells Life & Style. ?That?s where her nicknames, ?Duchess of Do-Little? and ?Lazy Katie,? come from. If you can?t find time to pay tribute to some old men who saved your country, what message does that convey??

A bad one, according to the queen. ?She would never say this in public, but even Her Majesty described Kate as ?Duchess Do-Little? when she was very tired one day,? shares a Buckingham Palace source. ?She comes from a different generation and has a sense of duty above all else.?

?Relations between royals and nonroyals have always been awkward and tense,? Princess Diana?s former butler, Paul Burrell, tells Life& Style. ?Marrying into the family firm is not easy.?

For more news on the royal family, pick up the latest issue of Life & Style Weekly, on newsstands now!

Queen Elizabeth II to Receive Biden, His Wife on June 13

Prince Harry and Meghan Markle not returning to royal duties

Buckingham Palace seeks the services of a trainee butler

Buckingham Palace to be given biggest ever facelift