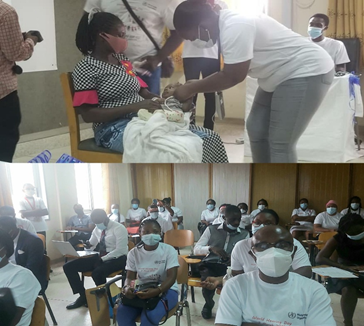 The screening programme involves the use of Otoacoustic Emission equipment to conduct instant tests in newborn babies at their bed sides immediately after delivery.

Dr Mrs Akosua Prempeh, Head of Audiology Unit of KATH, who made this known, said the screening was very important to identify the hearing needs of newborn babies.

She was speaking at the launch of this year’s World Hearing Day celebrations in Kumasi.

This year’s celebration, which was on the theme “Hearing care for all; screen, rehabilitate and communicate,” was used to educate the public on hearing health, organize a screening and undertake advocacy programmes to get policy interventions for people with hearing disabilities.

In Ghana, on average, hearing loss is identified when the child is between the ages of two and three years and unable to speak well.

This is because hearing loss is an invisible handicap, which often goes unnoticed until delays in speech and language development becomes apparent.

According to Dr Prempeh hearing loss affected about 466 million people worldwide, of which 34 million are children.

This makes hearing loss one of the most common disabilities worldwide.

It is estimated that by 2050, the figure will increase to 900 million.

This figure could jump to about eight per cent and sometimes higher, in babies who need intensive care.

Dr Prempeh appealed to the Ministry of Health and the Ghana Health Service to make available affordable hearing aids for patients with hearing loss to be rehabilitated effectively.

Professor Baafuor Opoku, Medical Director of KATH, stressed the need for the programme to be sustained and replicated nationwide for neonates in Ghana to have their hearing tested.

He indicated that Ghana was the third country in sub-Saharan Africa after South Africa and Nigeria to implement neonatal hearing progr ammes.