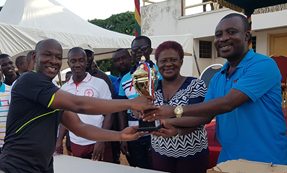 An inter-directorate sports competition has been organized by the Komfo Anokye Teaching Hospital (KATH) to mark the 57the Republic Day celebration.

Team ‘F’, comprising the emergency medicine, diagnostics, transfusion medicine and social welfare, emerged champions of the men’s football competition and for its prize, received a trophy and cash of GHc500.00.

Playing under the technical direction of Coach Francis Sarkodie, Deputy Chief Biomedical Scientist of the Transfusion Medicine Directorate, they won their first game by a lone goal against Team ‘G’ – made up of the Surgery, Trauma & Orthopedics Directorate, Health Insurance Unit and the Main Pharmacy.

They went on to beat Team ‘H’, which consisted of Internal Medicine, Finance, Oncology and Obstetrics and Gynaecology Directorates, 2-0 in the semi-final match.
Led in attack by nimble footed Simon K. Boateng, a laboratory technician at the biochemistry department, they were simply a delight to watch.

They put up a master-class performance to easily overcome Team “E” which grouped the Supply Chain, Public Health, Internal Audit and Biostatistics by three unanswered goals.
Boateng was adjudged the “man of the match” in the final match, while Godfred Owusu Addai, a national service personnel with the Social Welfare Unit, was voted best goal keeper.
In the volley ball competition, Team ‘E’, came out the winners with Team ‘A’, also winning the women’s spot-kick event.