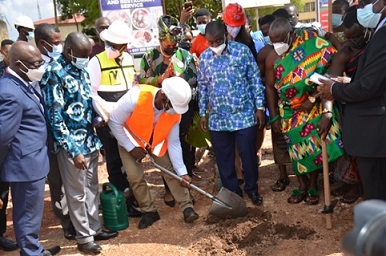 The Smile Train Incorporated, a United States of America based NGO, is constructing a state-of-the-art Cleft Lip and Palate Care Centre at the Komfo Anokye Teaching Hospital (KATH), in Kumasi.

The Two Million dollars project, expected to be completed in 18 months, will serve as a national centre for the treatment of cleft lip and palate disorders in children, and develop effective mechanisms to strengthen and expand care in the country and beyond.

The four-level facility will have an OPD, four theatres, lecture halls, library, operation wards, playing ground for children and others.

“It would add to the credentials of KATH and reinforce its reputation as the centre of excellence in advanced health care delivery, research and training,” he added.

The facility, he noted, would also boost the country’s position as responsive to dynamics and modern trends in health care delivery.

Again, it is a feather in the cup of the hospital’s post-graduate training and development of sub-specialities.

He said the facility would not only go beyond providing clinical services, but would also include social involvement like forming a caring support group and advance the course of Cleft Palate condition.

Professor Donkor pledged the Ministry of Health’s (MOH)commitment to provide the requisite human resource to man the centre upon completion.

Ms. Erin Stieber, Chief Programs Officer for Smile Train, said the project would enable many children and even some adults with Cleft lip disorders to have access to health care free of charge.

Dr Gyekua Plange Rhule, Paediatrician Consultant at KATH, called on the media to assist the Smile Train Foundation in the fight against stigmatisation of cleft lip disorders and palate conditions.

Black Stars Got The Love Back In Kumasi

Review: How Nigeria Held Ghana To A Goalless Draw Game In Kumasi