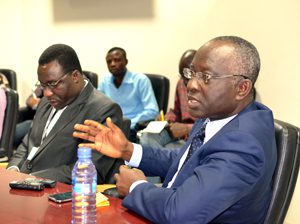 THE MANAGEMENT of the Komfo Anokye Teaching Hospital (KATH) in Kumasi has begun implementing some short and medium term strategic programmes to improve the quality of its services and patch up its tattered reputation.

Various incidents occurring at the major referral hospital in the country?s northern sector recently, including the infamous disappearance of the body of the 42-year-old Abdul-Moomin Suwaiba?s baby, have ragged its public image.

Isaac Offeh-Gyimah, the newly-appointed Chief Executive Officer (CEO) of the hospital at his maiden official media interaction on Monday enumerated a number of actions the institution was executing to reverse the trend.

Mr Offeh-Gyimah, who was the hospital?s former Director of Administration, appealed to journalists in both the print and electronic media to support KATH and prevent it from going down the drain.

?I am happy to introduce myself to you and also ask you to be my friends and actually my partners in this business of developing this all-important hospital. This is a hospital that should be seen as very important to be left to go down the drain,? the CEO said.

He said Ashanti Region is the most populous region, yet it is the least endowed in healthcare facilities, notwithstanding the strategic location of KATH in the area.

He called for a massive support for the hospital to save lives, considering its significance as the primary centre, regional and teaching hospital.

He said the directors of the various units have been asked to review their Standard Operation Procedures (SOPs) while a full customer care training programme is being considered to be undertaken.

KATH, he also said, was revising its monitoring systems and looking at its staff motivation, insisting that managers should be trained to motivate their subordinates to perform better.