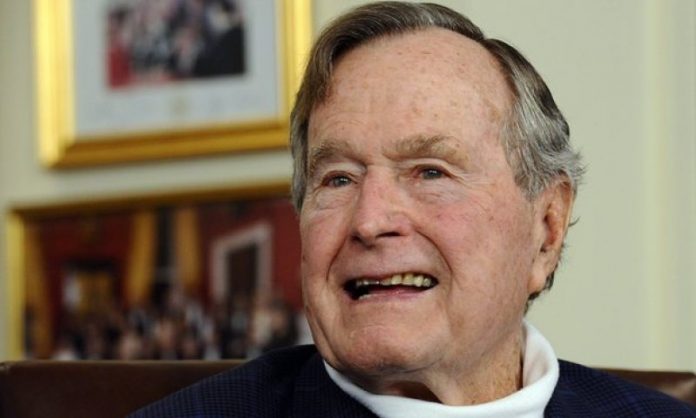 President George H W Bush is reportedly voting for Hillary Clinton in November, according to a Facebook post from John F Kennedy’s niece.

The post by Kathleen Kennedy Townsend – the former lieutenant governor of Maryland and daughter of Robert F Kennedy – shows her posing with George H W Bush with the caption “The President told me he is voting for Hillary!!”

Townsend – writing on Facebook under the name Kathleen Hartington – has been a longtime vocal supporter of Clinton’s campaign.

Jim McGrath, a Bush family spokesman, told the Guardian “The vote President Bush will cast as a private citizen in some 50 days will be just that: a private vote cast in 50 days. He is not commenting on the presidential race in the interim.”

The former president made clear in May he would not endorse Donald Trump, a stance echoed by his son, former president George W Bush. At the time, Jim McGrath, a spokesman for George H W Bush told the Guardian

“At age 91, President Bush is retired from politics. He naturally did a few things to help Jeb, but those were the ‘exceptions that proved the rule’.”
George H W’s son and George W’s brother, Jeb Bush was one of Trump’s unsuccessful opponents in the 2016 Republican primary.

The Republican nominee repeatedly maligned Jeb Bush, a former two-term governor of Florida, as “low-energy”. Jeb Bush has repeatedly derided Trump and his “abrasive, know nothing-like nativist rhetoric” but ruled out support for Clinton in a Washington Post editorial in July, writing “I haven’t decided how I’ll vote in November — whether I’ll support the Libertarian ticket or write in a candidate.”

If George HW Bush does cast his ballot for Clinton, he’ll join a number of prominent Republicans who have crossed party lines in 2016 out of disdain for Trump. The ranks include many close to the Bush family including Brent Scowcroft, George H W Bush’s national security adviser as well as Sally Bradshaw, a longtime top aide to Jeb Bush.

Spokespeople for the Trump campaign and the Clinton campaign did not immediately respond to a request for comment.

Voting in Benin marred by protests amid tense election

Voting is vital in nation-building –‘Drobomanhene’