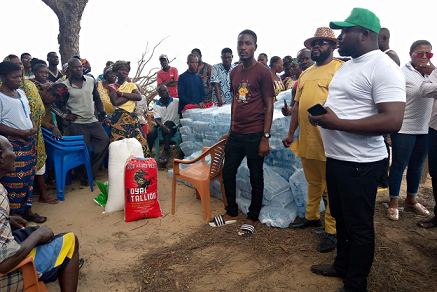 Mr Ernest Tetteh, an elder of Salakope has called on philanthropists and organisations to support the victims of the recent tidal waves that hit the communities.

The Agavedzi and Salakope communities have in recent times been feeling the harsh impact of tidal wave attacks, which displaced over 1,000 residents following the destruction of about 100 homes.

He said it was important for support to keep coming to these displaced people, some of whom currently live and sleep in the open and others in makeshift structures erected at the former dumping sites, as their livelihoods have been greatly affected.

Mr Tetteh said this when a philanthropist donated some quantities of rice, gari, beans, 150 bags of sachet water and a cash amount of GH¢400.00 to support the communities.

The elder thanked the young donor for remembering them in their difficult times and asked for God’s blessings upon his life so he could be successful in his life endeavours and be in a position to offer bigger support to people in need in the future.

Mr Innocent Lynford Tetteh, an Accra-based Marketing Consultant during the presentation of the items at Agavedzi said he learnt about the plight of the people in the media and decided to contribute his widow’s mite to alleviate their burden.

He said the donation was in line with his desire to give back to society and largely informed by the verses in Mathew 25:35-36, “For I was hungry and you gave me something to eat, I was thirsty and you gave me something to drink, I was a stranger and you invited me in, I needed clothes and you clothed me, I was sick and you looked after me, I was in prison and you came to visit me.”

Mr Elliot Edem Agbenorwu, Municipal Chief Executive of Ketu South who thanked his friend on behalf of his people said the gesture of sacrificing his (the philanthropist) time and resources meant a lot to them.