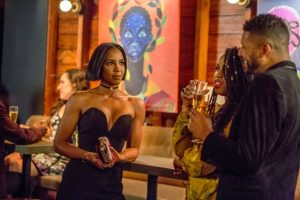 Kelly Rowland as Margot.On the surface, Lifetime’s Love by the 10th Date is a cute rom-com about the uncertainties of falling in love. It’s the story of a woman, Gabrielle (Meagan Good), who’s been unlucky in love — her mom thinks she’s cursed! — but is willing to try one more time before she’s out for the count (especially if it lands her a big magazine piece).

All she has to do is get out there, meet guys, and try as hard as she can to get to the 10th date — that’s when you know if you’re in a real relationship, according to the movie — with at least one dude. Oh, and more role rule: No sex!

Behind its highly polished exterior and delightful cast (Good, Kelly Rowland, Keri Hilson, and the hilarious Kellee Stewart), the movie holds something much more: a message about the importance of friendship and holding out hope.

The movie opens with Gabrielle having her hair set on fire right before trying to convince a guy who’s dumping her that she’s better than his ex (who he’s getting back with). She goes on one bad date after another — even to a strip club — in order to fully explore her romantic options. “She has this childlike quality that still believes that anything is possible, and has hope in everything,” Good, who produced the movie, tells Cosmopolitan.com. “She kind of never really loses that.” “I’m most excited about the fact that there’s another story being told on television about sisterhood, and women, on the surface, finding love together,” says Rowland, who plays Margot, a magazine editor whose unflappable sense of cool is shaken when a musician she’s interviewing asks her about her sex life.

Throughout the movie’s 90 minutes, it dives deep into issues such as open relationships, bisexuality, and the idea of whether a person “is enough” on their own, even if they haven’t found love by the 10th, 50th, or even 10th date. And while you’d expect every ending to be happy — NO SPOILERS — one of the best things about this movie is that it never goes quite where you expect. Is there a scene during which one of the characters beats a bouquet of flowers against every possible surface she can in a fit of rage? Yes. And it’s really, really funny. Are all the storylines wrapped up in a little bow at the end that continues to push the narrative that everyone finds love if they just try hard enough? Absolutely not.

While romantic comedies rarely explore issues of whether open relationships work or whether bisexuality exists, this movie tackles all that, and well. “We actually help the viewer if they’re going through it or they know somebody who is going through it,” Rowland says. “That’s what we love so much about TV, the fact that you’re sitting up there looking at someone who’s in a similar situation to yours and you’re trying to figure it out and you’re like, ‘If she can do it, hell, I can do it.’”

“What I loved about my character,” she says, “is the fact that Margot is extremely focused, she knows what she wants — in relationships, in business — and she just doesn’t play.” But while that kind of assertiveness is good, Rowland says, it’s also important to get out of any boxes you may have created for yourself, romantically or otherwise.

“In my head, my husband was way taller, he had some hair,” Rowland says of her own marriage to Tim Witherspoon. “But my husband is my same height, if not a little shorter, and he has no hair. And he is an absolutely remarkable husband and father. God sent me the perfect man and it’s just so funny — you just don’t know what package they’re going to come in. So don’t be close-minded when it comes to the package they come in.”

For Good, the message that “you are enough” is the important take-away from the movie. Does Gabrielle find love in the end? Will it be everything that she hopes for? It almost doesn’t matter (also, again, no spoilers) because the journey she goes on, the one where she finds herself while trying to find her other half, is what really counts. “She’s worthy of the best.”