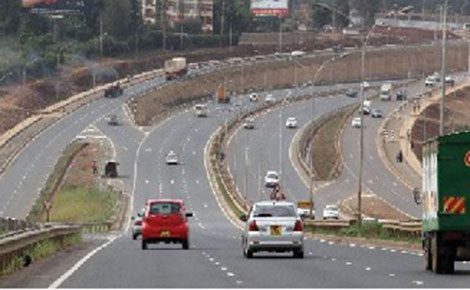 A consortium tasked with the maintenance of the road has begun compiling data on such motorists, with a view to surcharging them for damages.

Already, eight motorists have been charged with destroying rail guards in accidents in December, and are now required to pay up before their cars can be released to them, the KeNHA manager in charge of the project, Njuguna Gatitu, said.

He added that the cost of repairing destroyed railings and vandalised lights and metals was costing the Government a fortune, hence the need to put in place punitive measures.

Mr Gatitu also called on traders, particularly in the areas around Ngara, Githurai and Weitethie, to stop encroaching on the highway to enable the smooth flow of traffic and avoid being hit by speeding motorists.

?A component of our contract is to ensure the safety of accident victims by rushing them to hospital using a stand-by ambulance, a mobile patrol car manned by the police, and a tow vehicle to clear the road so that other motorists are not inconvenienced. But once this is done, we must surcharge for road damages,? Gatitu said.

He said the ambulance service would be free of charge to the nearest Government hospital as per the contract.

KeNHA has also partnered with Kiambu and Nairobi counties to enhance garbage collection and prevent it spilling onto highway.

?We have a problem, especially in Ngara and Githurai, where dumping of waste and spilling of affluent is rampant,? Gatitu said.

?We want to appeal to residents to desist from this because the same refuse clogs the road drainage, triggering blockages during the rainy season.?

He added that 10 more footbridges would be erected along the highway as a safety measure for non-motorised traffic.

?We have erected bumps to slow down traffic, and the footbridges will ensure safe passage for pedestrians.?

However, budget constraints may delay the commencement of the project, whose designs have been approved by?KeNHA and the Government. The 10 bridges will cost KeNHA an estimated Sh1.8 billion.

By James Wanzala, The Standard