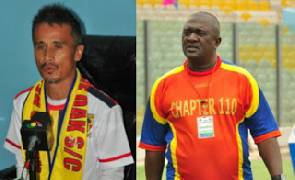 The two officials are involved in a bitter power struggle and nearly engaged in physical brawl during a recover training this week.

The heightened tension between the two mean appears to threaten team unity and cohesion ahead of the start of the new season.

Sabahn Quaye, who doubles as the Black Stars team manager has had his responsibilities scaled back –  a situation which has sparked tension among the top hierarchy.

And former coach Mohammed Polo is worried the situation could have spill-over effect on the team.

“They have to sit down and resolve the matter because this is serious,” he said

“How can a coach and his team manager insult each other in front of players. It’s simply not on.

“If they don’t settle the impasse, I’m afraid it will affect the team negatively.

“One has to give way to the other if an amicable solution is not found.”

In the midst of the public storm, Hearts General Manager Gerald Ankrah has been accused of instigating the team manager’s demotion  – an allegation which has strenuously denied.