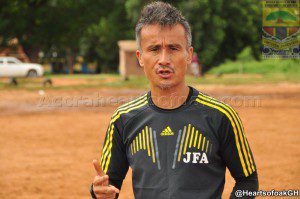 Under-pressure Hearts coach Kenichi Yatsuhashi has called on the club’s fans to show patience with his team ahead of the new season.

The Japanese trainer is under mounting pressure following the side’s unflattering campaign in pre-season.

The future of the 46-year-old has also been heightened by the departure of the club’s General Manager Gerald Ankrah – the man who brought him to the club.

Hearts produced an improved performance to share the spoils with Inter Allies in a 1-1 draw in a recent friendly.

Coach Kenichi Yatsuhashi has urged the team’s supporters to keep faith with him.

“Our friends are waiting for us to win te league and the FA Cup and we’ll achieve our aim,” he said

“The fans should be patient with us. We are a team in progress.”

Hearts have been rocked by bitter power struggle involving former top officials on one side and majority shareholder Togbe Afede on the other.