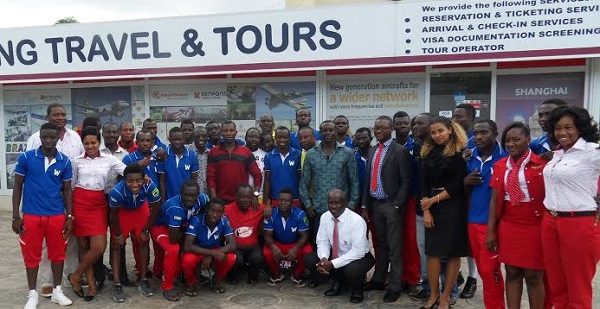 Former Asante Kotoko Board Member Kennedy Agyapong has called critics to stop chastising Samuel Osei Kuffuor for his public claim of being appointed president of the club.

The former Bayern Munich star has been heavily criticized for his public declaration of being appointed President of the Kumasi-based club even before the said appointment is made official.

Kotoko owner Otumfuo Osei Tutu II is reported not to have been happy with Kuffour?s public affirmation and has since chosen to delay or even abandon this appointment.

The situation has led to widespread condemnation of Samuel Osei Kuffour who is actually part of the existing board.

But former top official of the club Kennedy Agyapong believes the heap of criticisms being mounted on the former Ghana defender will only bring divisions to the club.

?Fans should not rejoice should the owner of the club, Otumfuo decides not to hand Kuffour the Kotoko top job,? he said.

?Kuffour has come under intense public criticism since granting interview on TV.

?As human as he is, I don?t think he meant evil by going public. For me I think he did that out of the insatiable love he has for club. Don?t forget he is still a board member.

?Painting Kuffuor black will create enmity between him and Opoku Nti, who is still in office.

?We should rather concentrate on how to build a formidable side for the future.?

Kennedy Agyapong who remains one of Ghana?s successful business mogul says he is confident the club owner will eventually make a wise decision on the future of the club.

?I believe the highly respected king, Otumfuo in his own wisdom, will choose somebody who will take the club to higher heights,? he added.

?He has done it before, and I believe he would make us all happy by bringing somebody after his own heart to turn the fortunes of the club.

?Let?s remain united and stop pointing accusing fingers at one management member or the other.?

Otumfuo Osei Tutu II is yet to decide conclusively on whether to retain or appoint a new board to steer the affairs of the club.