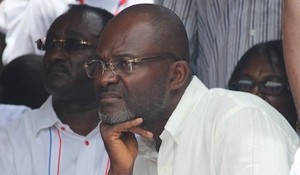 The Member of Parliament (MP) for Assin Central constituency Kennedy Agyapong has dispelled allegations that he offered bribe to members on the Appointments Committee of Parliament to influence their decision to approve the nomination of energy minister Boakye Agyarko.

Mr Agyapong is purported to have offered bribe to committee members inside his Rolls Royce car.

According to him, he is not a member of the committee and hence has no interest in giving out bribe whatsoever.

He wondered why Mr Agyarko has been singled out of the nominees who have been vetted to have offered bribe through him describing the allegation baseless.

An incensed lawmaker challenged the MP for Bawku Central Mahama Ayariga and Okudzeto Ablakwa MP for North Tongu who are leading the crusade to provide proof if he attempted to offer them bribe.

Speaking with Kasapa news’ Akwasi Nsiah, he disclosed that his Rolls Royce vehicle has been unmotorable for the past two years questioning why he would drive a spoilt car to Parliament.

The MP for Assin Central called on journalists to be circumspect in their reportage by desisting from relying on social media for information.

‘My name seems to pop up in every issue in this country, I don’t understand why people want to drag my name into this bribery brouhaha. I am not a member of the Appointments Committee, what interest do I have in this to give out bribe. Anyone with information claiming that I have offered bribe inside my Rolls Royce car should come out with that information. If Okudzeto, Ayariga and Suhunyini have evidence that they should come out, they should name and shame. The problem I have with the media is you always rely on social media for information, you will always get it wrong if you go that way,’ he fumed.

The firebrand lawmaker said he has taken a personal decision to remain silent over the bribery allegation because he doesn’t want to release sensitive information.

‘People should stay away from petty politics, anytime I have information, I come out with it, I don’t tell lies, I will not tell lies for anything. I have pledged to restraint myself this year, other than that I would have given it to them,’ he pointed out.

An irate lawmaker called on the committee members to solve their issues and desist from dragging his name into the mud.

He said parliamentary issues are mostly swept under the carpet suggesting to Parliament to hand over the case to Commission on Human Rights and Administrative Justice (CHRAJ) for proper investigations.