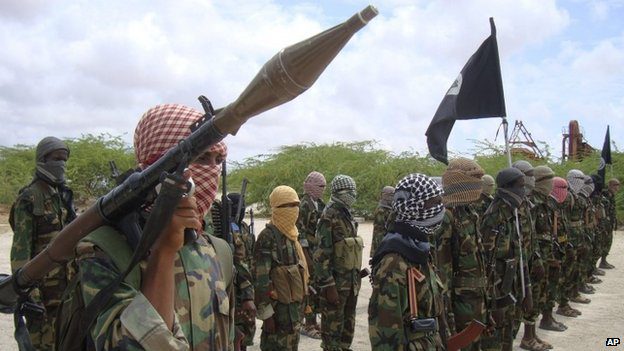 Kenya has deregistered 510 non-governmental organisations (NGOs), including 15 accused of links with terrorism, an official has said. The government has also frozen their bank accounts and revoked the work permits of foreign employees.

The move follows a heated debate in Kenya over a controversial new security bill aimed at fighting militants.

The al-Qaeda-linked al-Shabab group has been increasingly targeting Kenya for attack.

The organisations had been deregistered because of their failure to submit financial records, said Henry Ochido, the deputy head of the government-appointed NGO Co-ordination Board, which oversees their activities. Al-Shabab, which has been behind several attacks in Kenya, has pledged allegiance to al-Qaeda

Fifteen are suspected of money-laundering and financing ?terrorism?, Mr Ochido told the BBC.

Some of them were linked to the 1998 twin bombings of the US embassies in Kenya and neighbouring Tanzania, he added.

The board acted against them to help ?safeguard? Kenya?s security following information supplied by intelligence agencies, he said.

The decision to target more than 500 organisations is bound to cause an uproar in Kenya, where many fear that the government is using the threat posed by al-Shabab to curb democratic freedoms, reports the BBC?s Wanyama Chebusiri from the capital, Nairobi.

Many of them appear to be aid agencies and charities which failed to provide financial audit returns, AFP news agency reports.

Several of them seem to be Christian organisations, orphanages or groups working in the areas of health and development, it adds.

?The NGOs with accounting issues can only be allowed to operate if they successfully go through a thorough vetting process. Otherwise, they will remain deregistered indefinitely,??Fazul Mahamed, the executive director of the board, is quoted by Kenya?s privately owned Standard newspaper as saying.

International medical charity Medecins Sans Frontieres (MSF) is on a separate list of 12 organisations which has been given 21 days to submit audited financial statements, correspondents say.

MSF said in response that it had complied with all ?reporting obligations? and it was in contact with the board ?to clear up any misunderstanding?.

the right to detain terror suspects for up to one yearto tap communications without court consentand the requirement for journalists to obtain police permission before investigating or publishing stories on domestic terrorism and security issues.

Al-Shabab has killed 64 people in two attacks in the north-eastern Mandera region since last month.

Non-Muslims were singled out and shot dead in an attack on quarry workers and bus commuters.

Last year, 67 people were killed when four gunmen took over the Westgate shopping centre in Nairobi.

Kenya?s President Uhuru Kenyatta has said the government will not ?flinch? in the campaign to defeat the militants.

NDC first vice-chairman hopeful targets how to strengthen the branches