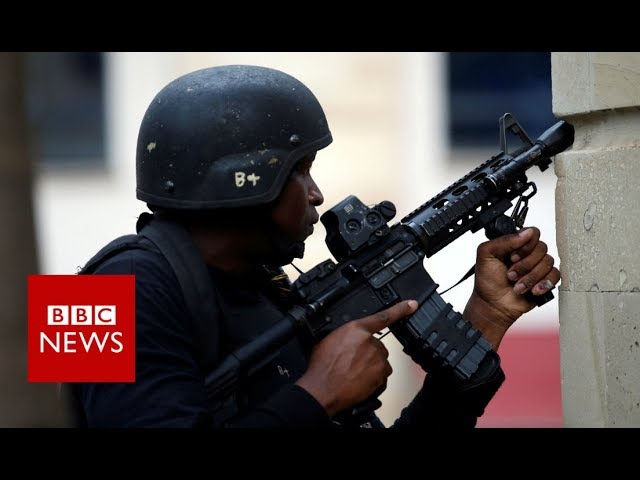 Kenya on Wednesday marked the first anniversary since the terrorist attack at Nairobi’s DusitD2 business complex that claimed 21 lives amid heightened vigilance occasioned by new threats.

Security officers intensified patrols in Nairobi as the country paid tribute to victims of a terrorist attack on Jan. 15, 2019 on the business complex that houses a five-star hotel and prime office blocks.

The first anniversary of the Dusit business complex terrorist attack was marked amid heightened concern over escalating attacks by Somalia based al-Shabab militants in northern Kenya and the coast region.

“It is true that our country is grappling with a mounting security challenge posed by al-Shabab and other terror groups. This calls for heightened vigilance at community level to root al-Shabab sympathizers,” said Matiang’i.

He spoke during a meeting with police commanders in the coastal city of Mombasa where new strategies were released to revitalize the war against terrorism.

Kenya has lost at least 25 people since December last year as a result of attacks by al-Shabab militants in the northeastern and coastal counties neighboring Somalia.

The militants have targeted communication masts, schools and residential houses rented by communities that are not native to the volatile northeastern Kenyan counties of Garissa, Mandera and Wajir.

Matiang’i said the government will deploy additional elite police units to terrorism hotspots to guard critical government installations, homes and public service vehicles that have become the targets for attack by al-Shabab militants.

He said that security personnel were on heightened alert to avert further al-Shabab attacks as the country marked the first anniversary of the Dusit terrorist attack.

“Our security officers have intensified surveillance along the border with Somalia to prevent any infiltration by al-Shabab militants into the northeastern and coastal regions that have borne the brunt of latest terror attacks,” said Matiang’i.

The militants have carried out more than ten attacks in the northeastern and coastal regions while their Jan. 5 raid on Manda airstrip that neighbors a joint Kenya-United States military base, broke new ground.

Analysts say the attack at the airstrip that is located in the Indian Ocean island of Lamu, which claimed the lives of one American serviceman and two contractors, reaffirmed the al-Shabab’s prowess in asymmetric warfare despite years of military offensive in their strongholds inside Somalia.

Security experts said that Kenya should inject vitality in counter-terrorism strategies in the face of the ever-evolving threats from home-grown and foreign militants.

Robert Musamali, a Kenyan security analyst said that Kenya should employ a combination of lethal force and preemptive tools that include intelligence sharing and community policing to minimize terrorist attacks.

“We must be prepared for a long-haul war with al-Shabab as the militants keep on reinventing themselves despite loss of territory and death of countless fighters during airstrikes and ground offensive,” said Musamali.

“Our surveillance and intelligence sharing capabilities must be strengthened to preempt future attacks even as we carry out targeted military offensive against the terrorist network,” he added. Enditem.

World Insights: From earthquake recovery to coronavirus battle: A tale of Tibetan dance and African songs

Farmers’ strike shows no signs of waning in India