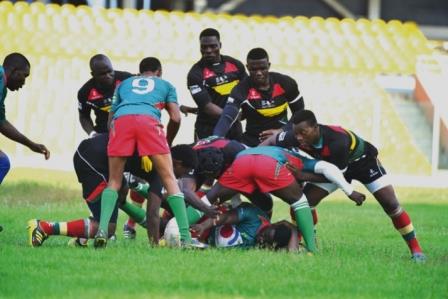 The Kenya rugby fraternity was thrown into mourning on Wednesday following the sudden death of international Tony Onyango.

The player’s club, the Kenya Commercial Bank (KCB) RFC said the incident happened at his home in Ngong on Tuesday.

“It is with seismic disturbance that we announce the sudden death of our KCB Rugby player Tony Onyango Opondo. We will update on further details. We ask for your prayers during this trying time,” KCB RFC said in a statement.

According to reports, the full-back collapsed and died after attending training with his side in Nairobi ahead of the domestic Kenya Cup (premier league) action this weekend.

Authorities say a post-mortem would be conducted on the body that was removed to the mortuary before releasing further information on the cause of death.

He established himself in the 15s side under South Africa boss, Jerome Paarwater, and last featured for the team on November 23, 2018 when Kenya took on Germany in the 2019 Rugby World Cup Repecharge.

Onyango featured for the sevens side in the 2014-15 season under another South Africa head coach, Paul Treu.

His demise sparked an outpouring of grief on social media, with Onyango trending on micro-blogging site, Twitter as tributes flooded online.

He was part of the KCB team that lifted the domestic title Kenya Cup last season after beating Kabras Sugar RFC 23-15. Enditem