The Kenya rugby 7s head coach Innocent Simiyu is considering making changes to his squad after an underwhelming start to the 2016/17 HSBC World Rugby Sevens Series. 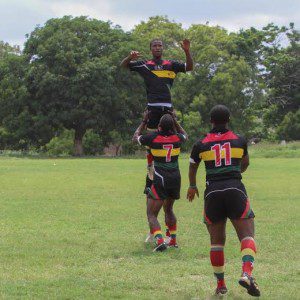 Kenya is languishing in 11th place on 27 points after the opening four legs of the global circuit following another underwhelming tour to the New Zealand and Australia 7s in Wellington and Sydney.

The team that won their first Main Cup title in the 2015/16 Series when they took the honours in Singapore is already 13 points adrift compared to the same stage last season.

Simiyu who took over the side just before the start of the current campaign blamed a catalogue of basic mistakes and lack of focus.

“We had a lot of errors which is spoiling our game and we were caught out in those areas in critical moments of our games,” the former Kenya 7s skipper who is struggling to fit into the ‘larger than life’ profile of his predecessor, Benjamin Ayimba, said in Nairobi on Tuesday.

“We let down our guard and lost especially in handling the ball and defensive errors on the breakdown. We are talking of 10 errors per game and it is hard to win with such errors in your team,” Simiyu added.

After winning the Challenge Trophy in Wellington for eight points, Kenya slumped to a lowly 14th finish in Sydney after losing their final placement match to Canada.

“The mistakes are painful and costing us games. If you look at our games against England and South Africa, we were three minutes away from beating them but we lost in the final seconds due to lack of concentration,” the dejected Simiyu added when his team made a low key return home to Nairobi in the early hours of Tuesday.

He announced he would make the changes and fuse untested players with regulars ahead of the next stop of the tour- the USA 7s in Las Vegas- next month.

“We have to get back to the drawing board and correct the mistakes that we did because we know what we have to work on to get the performances we desire. We have New Zealand, Argentina and Russia in Las Vegas and that is a balanced pool to me,” his captain Andrew Amonde added.

Kenya is in Pool C of the USA 7s in Las Vegas while Wellington and Sydney champions, South Africa were drawn with Wales, Canada and France in Pool A.

Losing Australia 7s finalists, England will battle USA, Samoa and Chile in Pool B with Australia, Fiji, Japan and Scotland facing each other in Pool D. Enditem