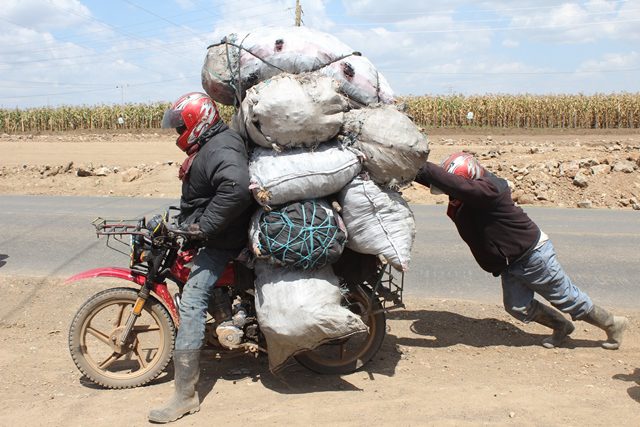 Joyline Adhiambo’s face lightened up as she carefully wrapped a few gifts she intends to give her child once they reunite with the anticipated lifting of lockdown next week.

The mother of one has not held her child in three months since a presidential declaration on cessation of movements from the Kenyan capital, Nairobi to other rural counties put 122 km between her and her daughter.

Adhiambo, a 38-year-old financial advisor was accustomed to shuttling from Nairobi, where her office is stationed to her ancestral village until April 6 when she was found herself locked by a directive aimed at taming the spread of COVID-19.

“I was in my office in Upperhill, Nairobi when I saw the televised announcement by the president banning movement in and out of Nairobi. I became concerned given that my daughter is only three years old and in constant need of my presence,” said Adhiambo.

She joins a list of Kenyans who have been inadvertently split from their families, children and spouses by containment measures aimed at slowing the spread of COVID-19.

Many of them now await with bated breath a presidential address on Monday that could possibly reconnect them with their loved ones.
“I have been counting the number of days leading up to the lapse of the containment measures. I long to see my daughter and spend time with her,” said Adhiambo.

The anti-COVID-19 containment measures like restricted movement and curfews may be set to lapse on July 6 after being extended for 30 more days in June.
Kenya has been put under a partial lockdown since April 6 when Nairobi and the coastal city of Mombasa which account for the bulk of the positive cases witnessed controlled movement.

“We are going to be starting domestic flights and this is what we are going to use over the next couple of days. Because we are opening up the lockdown that we have had between inter-county lockdown and ultimately I think that’s what’s going to set the pace for getting a day for us to open up now once again to international flights,” said Kenyatta.

Even as Adhiambo holds on to hope, she is alive to the prevailing challenge posed by easing restriction measures without proper protocols.

“I am aware of the difficult circumstance facing the government but overtime common sense has been dissolved by my emotions. I am desperate to see my child,” she said.

The likely reopening of the country and subsequently the economy comes hot on the heels of a rising trajectory of positive COVID-19 cases.

As of Saturday, Kenyan positive cases stood at 7,577, with 159 people having succumbed to the disease and 2,236 recoveries.

However, even with the soaring cases, the Ministry of Health has reported that Kenya has a relatively low fatality rate of 2.29 percent compared to a global average of 6.7 percent.

Over the past month, Kenyan counties have been sprinting to meet a threshold that will dictate the opening up of the country.
Among the requirements include at least a 300-bed capacity, adoption of a triage system at the county level, enhanced capacity to detect and manage cases among others.

Chemutai Alonzo, a 21-year-old walked into her sister’s living room in Nairobi’s Umoja estate, ready to chat with her parents only that their conversation will be over Zoom.

Her parents have been stuck in Tanzania due to a presidential decision that saw the closure of the Kenya-Tanzania border to control the spread of COVID-19.

“I anticipate that the president’s declaration will facilitate the opening of the Kenya-Tanzania border so that I can see my parents,” said Alonzo.

Alonzo’s parents are traders based in Tanzania for close to five years but the unprecedented closure of the border led to a hiatus in the business and separation from their two daughters.

“A zoom call cannot substitute the physical presence of having my parents around, I look forward to seeing them soon,” Alonzo said.

The Kenyan Ministry of Health has reiterated the risks that accompany the lifting of restriction measures noting that the responsibility of curbing the disease lies on citizens adhering to hygiene measures and social distancing.

“We are aware that restriction measures have led to adverse social-economic consequences and have generated intense pressure to have the measures relaxed,” said Rashid Aman, Chief Administrative Secretary in the Ministry of Health of Kenya.

“However, the control measures cannot be done away altogether, you have seen how countries that have deescalated have been hit by spikes,” he added.
Meanwhile, the education sector is set to suffer a major blow as officials said that reopening of the schools might be pushed to next year and not as earlier projected in September.

“We have been informed by doctors that the peak is likely to come in September and perhaps tamper down around January, so we have reached a consensus that the President will pronounce soon,” said George Magoha, Cabinet Secretary of Ministry for Education of Kenya. Enditem