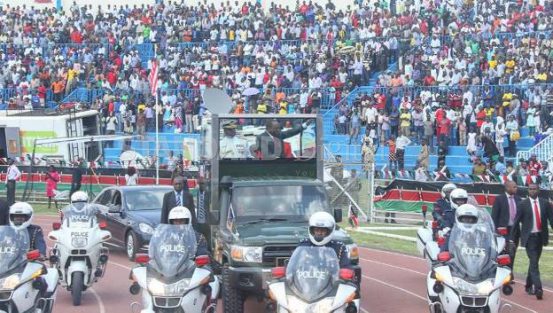 Kamakia had just delivered his speech at the Nanyuki Stadium yesterday afternoon when he collapsed. He passed away before arriving at the nearby Nanyuki Cottage Hospital.

Kamakia was the Ngobit Ward MCA on a TNA ticket, and was a prominent businessman in Nyeri and Laikipia counties.

“He has just addressed the crowd and handed over a microphone to the Deputy Speaker when he coughed and collapsed,” said a source who was at the celebrations.

In his address, Kamakia had decried the wide gap between Laikipia County’s people and leadership and President Uhuru Kenyatta’s national government.

He said Laikipia has been neglected in major development projects and cited the dilapidated Nanyuki-Rumuruti and Nanyuki-Nyahururu roads.

“Now that President Kenyatta has appointed former assistant minister Mwangi Kiunjuri to his Cabinet, we believe we have a worthy representative,” he said.

And in Kiambu, the county Secretary for Agriculture collapsed and was rushed to hospital during the Jamhuri Day celebrations.

Dr Monica Waiganjo, a diabetic, collapsed from her seat as Governor William Kabogo was reading his speech, causing commotion on the main dais.

There was no ambulance at the venue and officials and colleagues had to carry Waiganjo to her vehicle after trying to resuscitate her, then take her to Kiambu District Hospital where she was stabilised and released before 5pm.

After the celebrations, Governor Kabogo skipped a luncheon to visit Waiganjo in hospital.

By JOB WERU and JOHN KARUME, The Standard