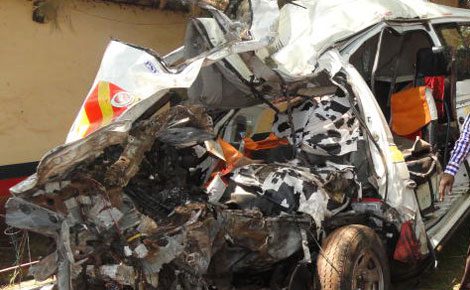 Speaking at Kenyatta International Convention Centre during a thanksgiving ceremony for the 311 lives that were saved, Mr Kamau said January witnessed the greatest reduction at 27.9 per cent while June recorded the worst with an increase of 30.5 per cent in fatalities. Nairobi, Nakuru and Kiambu counties recorded top fatalities standing at 40 per cent, 11 per cent and eight per cent respectively, while together with other seven counties they accounted for 64 per cent.

The remaining 36 per cent was spread across the other 37 counties. This was a first of its kind ceremony championed by high school students from Starehe Boys, State House Girls and Nairobi School dubbed ?311?.

It appreciates the achievements realised in 2014 in the fight against road carnage. Kamau said they were also remembering those who lost their lives and others who were seriously injures during the same period.

Candles were lit to signify the lives of those who died.

?Road crashes leave in their trail shock, despondency, grief, loss of productive lives, loss of breadwinners, destruction of families and in most cases abject poverty and misery. We should never just look at the victims as statistics but real people, families and communities,? said Kamau.

Kamau appreciated the efforts put in by all stakeholders in bringing down the number of fatalities, noting that since 2004 the number of people losing their lives had steadily increased at an average of seven per cent annually. The United Nations (UN) wants all counties to reduce road fatalities by 50 per cent by 2020.

By Lonah Kibet, The Standard

Kenya beefs up security along border after al-Shabab attack