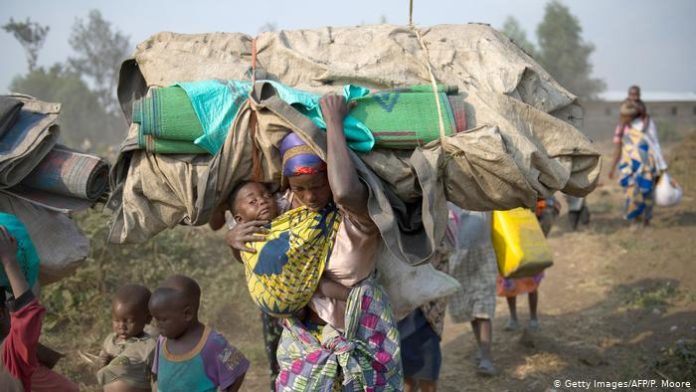 When Lake Victoria burst its banks and displaced hundreds of families in western Kenya about a month ago, many of the victims hoped they would return home sooner when the rains subside.

Normally, the rains start in March and end in May, with April being the peak. However, the rains have continued unabated, remaining heavy in April and would extend to next month as climate change effects bite, according to the meteorological department director Stella Aura.

This means that the families affected by the floods would wait longer to return home, which is leading to desperation as hundreds stay in camps. “It is the first time in my life I am being displaced by the lake.

It is a terrible life living in camps. I had hoped the rains would decline and the water would recede for us to return home but this does not seem it will happen soon,” Gabriel Auma, a resident of Budalang’i in Busia, western Kenya, said on Saturday.

Auma is currently living with his family in a makeshift tent some kilometers away from the lake.

His house is submerged in water and crops that he had farmed destroyed in what portends a bleak future that would see him and hundreds of other citizens rely on food aid.Miles away, a similar situation is facing residents of Kisumu, Homa Bay and Migori counties, who live near the lake.

The backflow from Lake Victoria has not only displaced them but also killed the source of their livelihoods — fishing.

Hundreds of people in the region rely on fishing and fish trade to earn a living, but this cannot happen as the high waters in the lake remain dangerous to venture in. That, however, is not the only problem. The floods have destroyed boats, houses for fishermen.

Hundreds have been desperately waiting for the lake waters to recede in vain. Thus, to make ends meet, a good number of residents are taking up other trades as they hope the rains would subside soon.

Away from the floods, locust threat, another effect of climate change, is still hanging over the east African nation despite aggressive spraying leaving Kenyan farmers especially in central and northern Kenya desperate. “It has been months since the locust invasion started.

The insects keep coming to eat our crops and going away, when will they go forever,” said Mary Ngari, a farmer in Tharaka Nithi. Her desperation captures the sentiments of many farmers in the East African nation.

The locust threat looms large, according to the Food and Agriculture Organization (FAO) of the United Nations. In its latest update of Thursday, FAO says the current situation remains extremely alarming in Kenya and East Africa which face an unprecedented threat to food security and livelihoods.”New swarms from current breeding will form from mid-June onwards, coinciding with the start of the harvest.

In Kenya, more hopper bands have been detected in the northwest where control operations are ongoing. Mature swarms are still present in some places and a few of these swarms moved into the southeast,” noted FAO.

Beatrice Macharia of Growth Point, an agro-consultancy, noted that climate change effects have been severe in Kenya in the last two years.

“During this period, Kenya has witnessed a severe attack by pests mainly fall armyworm, drought, followed by heavy rains and now locusts.

Many initially thought climate change mainly hurt farmers because of the erratic weather pattern but it’s now affecting everyone directly as one can see from floods,” she said, noting it is time citizens take the problem seriously and enhance mitigation effects.