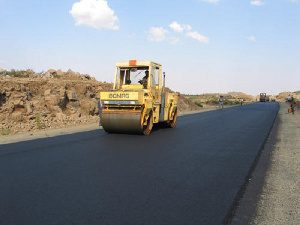 Nana Owusu Boadu Ayeboafo, the Akwamuhene of Kenyasi Number Two Traditional Area, has appealed to the Government to partner with Newmont Gold Corps Ahafo Mine to construct the eight-kilometre Hwidiem-Kenyasi Number Two link and town roads.

“Government should apportion some of the taxes from Newmont Ghana to build our road infrastructure,” he said.

Nana Ayeboafo made the appeal in an interview with the Ghana News Agency (GNA), when he gave Christmas and End of Year messages on behalf of Odeneho Kwabena Nsiah Ababio, the Paramount Chief, at Kenyasi Number Two in the Asutifi North District of the Ahafo Region.

He said dust from the untarred road had engulfed the community making life unbearable for the people.

Nana Ayeboafo said the youth of the community at a point threatened to rebel against the traditional authority, because “they thought we are not capable of addressing their needs and concerns, which is to get the roads tarred.

“Everywhere, contractors are working on their roads, but when it comes to our area the contractors have abandoned our roads for the past one and half years,” Nana Ayeboafo said.

He said the area had contributed greatly to the growth of the Ghanaian economy through mining and other economic activities.

However, “we have been left to our fate and gradually being killed by dust.

“Even if our communities were not contributing to the national economic growth through mining, we also deserve better because Ahafo has been made a region and development must catch up with the people,” Nana Ayeboafo added.
GNA