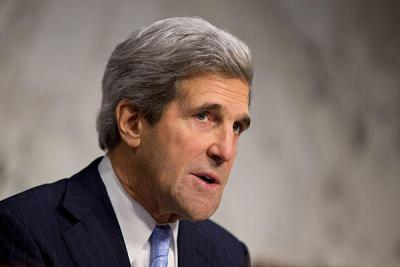 U.S. Secretary of State John Kerry on Sunday arrived in Nairobi and started his visit in Africa, with fighting terrorism and regional situation topping his agenda, said a Kenyan official. Cabinet Secretary for Foreign Affairs Amina Mohamed told journalists in Nairobi that the visit sends a strong signal about the current state of relations between the two nations.
“We will use the visit to lay the ground and roadmap for the July visit of U.S. President Barrack Obama to Kenya,” Mohamed said minutes after Kerry arrived in Nairobi to begin his visit that will also focus on global terrorism, especially Al-Shabaab militants who have waged cross border attacks in the country.
The U.S. top diplomat is due to hold a number of security, bilateral and human rights meetings with his host President Uhuru Kenyatta, including violence in South Sudan and Burundi where the incumbent is seeking third term in office.
During the visit, Mohamed said Kerry is expected to meet with Kenyatta, senior government officials, as well as members of the civil society and opposition.
The CS said between now and July, more U.S. officials are expected to visit Kenya.
During his visit in Kenya, Kerry is also expected to lay a wreath at the site of 1998 U.S. embassy in Nairobi bombing that claimed the lives of about 200 people.
Mohamed said Kerry is also scheduled to have a meeting with Kenya’s cabinet secretaries in charge of defence and internal security.
“The reason is that we are seeking stronger security links with the U.S., ” she said. “We are jointly looking at the 13 programs that the U.S. has on anti-terror, so that we can use them to step up our fight against terror activities in Kenya,” she said.
Mohamed said the anti-terror programs will help in capacity building and training of Kenya’s security personnel. She added that both Kenya and the U.S. have suffered terror attacks as a result of having open and democratic societies.
During the visit, Kerry who will also visit Djibouti, will hold meetings with government officials, business leaders, opposition leaders, humanitarian aid organizations and civil society representatives. Enditem