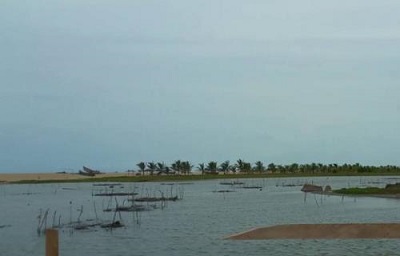 Government on Thursday announced that the Keta Lagoon will soon be dredged to avert perennial flooding in Keta and surrounding communities.

This is because the persistent inflow of sediments and other debris from River Aka and Tordzi; and the Belikpa stream into the Keta lagoon has been identified as the major cause of the yearly flooding that causes result in the loss of lives and properties.
Mr Francis Asenso-Boakye, Minister for Works and Housing announced the planned dredging when he appeared in Parliament, in Accra to respond to a question by Mr Kwamen Dzudzorli Gakpey, MP for Keta Constituency.

Mr Gakpey asked the Minister what “plans the Ministry has towards dredging the Keta Lagoon, which is the largest natural lagoon in West Africa.”

The Minister responded: These major transfer and deposition of sediments into the lagoon are reducing its capacity to hold storm water and consequently causing major flooding of communities in the environs of the lagoon”.

This, he noted, “leads to the unfortunate loss of lives, livelihoods, and properties” and “impacts negatively on the economic and
social lives of the people.”

Mr Asenso-Boakye said the Ministry realizes the “urgent need” to work to mitigate flooding, and the dredging of the Keta lagoon was proposed as an important intervention that would make a significant difference to the lives of the people in the community.

The Ministry, he said, would “commence engagement with relevant stakeholders and make the case for funding to the Ministry of Finance to undertake dredging and other activities that will enhance the safety and protection of the communities in the environs of the Keta Lagoon.”

He assured the residents in the Keta Constituency that the Ministry would provide updates on the progress they would make.

The Keta Lagoon is part of the Volta estuary comprising a Complex array of lagoons and several islands. The Keta Lagoon complex is a designated Ramsar site and it is about 130km in length.

The lagoon is surrounded by many settlements and towns, which include Anloga, Woe, Keta and Kedzi to the south; Anyako and Anlo Afiadenyigba to the north; Kedzi, Alakple and Tregui to the west; and Denu and Adina to the east. The lagoon and its environs host major settlements, fishing activities, salt production and farming.