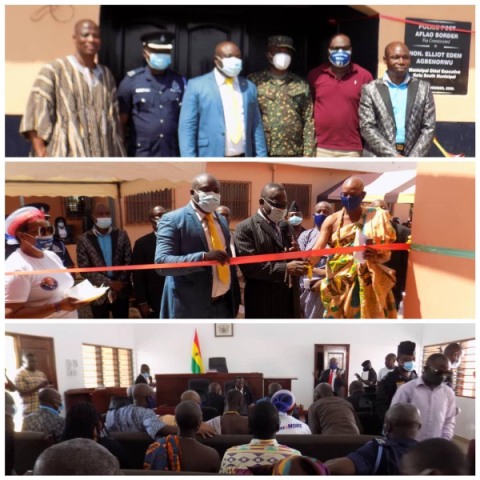 The Ketu South Municipal Assembly has commissioned a new Circuit Court and inaugurated the District Court at the Assembly Hall both at Tokor to revitalise the Aflao District and the Circuit Court.

The two courts, the busiest in the Volta Region were closed down in March 2019 with pending cases there, transferred to Agbozume District Court and Keta Circuit Court for continuation in an exercise by the then Chief Justice, Madam Sophia Akuffo to weed out courthouses that did not meet the standard of edifices for the dispensation of justice in the country.

Mr Elliot Edem Agbenorwu, Municipal Chief Executive for Ketu South in an address during the commissioning said the Assembly recognised the role of an effective court system and made efforts to revive the truncated judicial service delivery in the Municipality.

He said the GHC 454,000.00 District Performance Assessment Tool (DPAT)-funded new court building with ancillary facilities including judge’s chamber, secretary’s office and washrooms for staff, ongoing construction works for a new court at Nogokpo, and accommodation for judicial staff at Tokor formed part of steps to improve the delivery of justice.

Mr Agbenorwu said the Assembly’s commitment to an improved judicial system was not in doubt as “this is the first time an Assembly has put up a courthouse to house a court” saying, the norm was to either convert an old building into a court or wait on the Judiciary to build one.

Justice George Boadi, Supervising Judge for Volta and Oti Regions, who represented the Chief Justice, Justice Mr Kwasi Anin-Yeboah congratulated the Assembly for mobilising resources to build the court and called on it to ensure reasons for which it was closed down did not recur.

He said the new court should not give reasons for litigation and called for minimal entry of civic disputes to lessen the pressure on the court to effectively handle criminal cases.

“I’ll ask that you take civic cases to Alternative Dispute Resolution (ADR) for example churches, mosques, chiefs, family and friends to settle issues. At ADR, it is less expensive and acrimonious and again, no one loses or wins. Take cases there and leave the serious crimes at our doors.”

The commissioning, which had representations from Volta Bar Association, traditional leaders, the Judicial Service, the local assembly and security agencies saw the Circuit Court have its first sitting to hear a defilement case brought against a 19-year old phone repairer.

The day also saw the official handover to the Police, the Police Post built at the Aflao Border. Supt Bempah Sarpong, the Aflao District Police Commander representing the Divisional Commander, said the new police post would help fight crime at the border and its environs noting, criminals had preyed on innocent travelers knowing the Aflao Police Station was some distance away.

He assured dedicated and committed personnel would be posted to the new police post and called on residents to provide timely and useful information to enable the Police deliver saying, crime fighting was a shared responsibility.

Four on remand for illegal mining