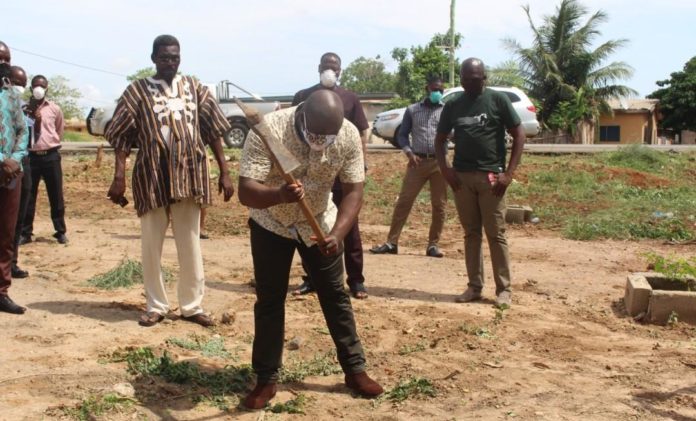 Mr Elliot Edem Agbenorwu, the Municipal Chief Executive (MCE) for Ketu South has cut the sod for the construction of a new Community-Based Health Planning and Services (CHPS) compound at Akame in the Municipality.

The project with adjoining two-apartment nurses’ quarters expected to be completed in four months, would be funded from the Assembly’s Common Fund.

Mr Agbenorwu said the project was important to ensure quality health delivery for the people of Akame and surrounding communities especially in the wake of COVID-19.

He said just as President Nana Addo Dankwa Akufo-Addo in his 8th address to the nation on COVID-19 indicated plans for the construction of 88 district hospitals and six regional hospitals to strengthen Ghana’s health system, “the Assembly will also do its part.”

“We’re also going to build CHPS compound to see to the health needs of residents of Ketu South. What we’re starting now is a Common Fund project and we’ll make sure we prioritise what will be coming to finish up the project for our common good,” the MCE said.

Mr Wilfred Dakunya, Assembly Member for Akame Electoral Area welcomed the Assembly’s decision for a new CHPS compound for the community saying, it would help serve the purpose for its existence in the area.

“This current CHPS compound was built in 2014 and though we have it here, our people still travel to Aflao and other places to access healthcare because the place is too small with just one nurse managing it and no midwife. Besides, there’s no accommodation for that one nurse to be always be available to address the health needs of the people.

“I understand this current place would become the weighing shed following the completion of the new one and we’ll call on you the media to keep the Assembly in check to complete the project on the appointed time to bring relief to the people,” Mr Dakunya added.

Mr David Tiahno Quarshie, the 2020 Parliamentary Candidate of the New Patriotic Party for Ketu South called on residents to collaborate with workers for speedy completion of the project and said, “Let’s take care of it after it’s completed.”