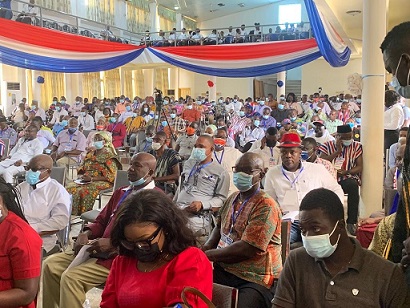 The Annual Delegates Conference of the New Patriotic Party in the Ketu South Constituency to elect new executives has been postponed indefinitely over contention again with the delegates’ register.

The decision to suspend the elections was taken after the party leadership, including representatives from the regional office and Area Coordinators failed in their attempt to get the aspirants to agree on the register with which to conduct the elections.

Some aspirants kicked against a suggestion of an audit on the day of the over 1,400 delegates on the “new register” to sort out discrepancies to allow for the elections to hold saying, most of the delegates they had visited and campaigned to were denied accreditation to partake in the elections and that the audit would be an exercise in futility.

Before the suspension of the elections, aspirants, delegates, and the Electoral Commission (EC) officials who the Ghana News Agency (GNA) spoke to were confused as to what was to come as delegates remained locked out of the venue due to accreditation problems and alleged discrepancies in the electoral album.

These concerns prevented the EC officials from proceeding to conduct the elections scheduled from 0700-1400hours resulting in meetings of the party leadership for a solution.

Some delegates who spoke to the GNA after the elections were postponed around 1420hours expressed their disappointment about the whole process.

Madam Peace Midadze from the Huime Electoral Area said delegates from nine out of the 39 polling stations in her Area had their names missing in the album and so were not given accreditation.

“We’ve never experienced this during any of our delegates conferences. Today is Sunday and some of us have important roles we play in church but for the love of the party, we came here. We remained under the sun for hours and after everything, the reason for which we’re here is cancelled.”

Miss Fuseina Umaru, one of the four aspirants for the Assistant Secretary position said though she would have loved for the elections to hold, its postponement was in the best interest of the party as aspirants could not be brought to agree on the register.

Madam Judith Ayivie, the incumbent Women Organiser who is seeking a reelection said she was unhappy about how the day ended because the delegates left everything, they had to do just for the elections which she was optimistic would have gone in her favour.

Mr Kofi Sakyi Boampong, Ketu South EC Officer said his outfit had no issue and was ready and waiting to conduct the elections noting, they would be available at the next date the party would decide on.

The Ketu South Delegates Conference could not be held on the initial date of May 02 due to concerns over the electoral register, attempts to disqualify eligible candidates and failure to follow laid down procedures of the party.