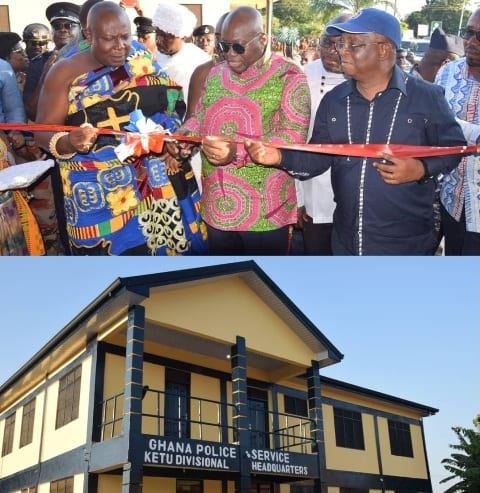 The commissioning on Monday meant Ketu South Municipality would no longer be under Keta Police Division.

The Municipality with the country’s busiest border with three district police headquarters at Aflao, Denu and Agbozume had since been under the Keta command.

This necessitated appeals from the chiefs and people of the area for a divisional status to help the police in crime fighting.

The new building would also house the Municipal Fire Service Headquarters and allied offices to serve as the disaster management department for the Municipality.

The commissioning took place when the President visited Ketu South on the first day of his two-day tour of the Volta Region, his first visit to the Region since the carving out of Oti Region.

President Akufo-Addo assured of his government’s commitment to granting the request of roads and other developmental projects of the chiefs and people of the Municipality.

Massive participation at the Reverential night to usher in Emancipation Day