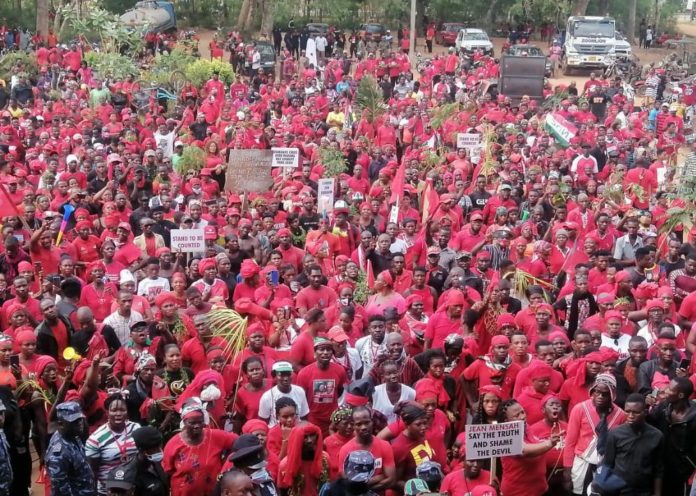 Hundreds of residents have poured onto streets in the Ketu South Municipality to demand that the right verdict be delivered in the just-ended Presidential and Parliamentary elections in the country.

The protesters adorned in black and red attires with some in the colours of the opposition National Democratic Congress (NDC) believed the Electoral Commission (EC) massaged the figures in favour of the ruling party.

Thursday’s protest march organised by the leadership of the NDC in the Constituency formed part of a nationwide demonstration by the party to protest some Parliamentary results for some constituencies and the Presidential result, which saw the incumbent President declared as President-elect.

Madam Jean Mensah, the EC Chairperson announced President Akufo-Addo as the winner of the December 07 polls on Wednesday, December 09, 2020 amidst concerns by the NDC of vote rigging.

Subsequently, Mr John Dramani Mahama, former President and leader of the NDC came out to say he and the party were unwilling to accept the outcome of the results disclosing there would be series of activities to ensure the right thing was done.

The Ketu South protesters through the placards they carried while they walked through the principal streets to present a petition to the Municipal EC office, called on Ghanaians everywhere to “stand and be counted” in ensuring their will regarding the leadership of the country was respected.

“I voted for freedom, not exile, Ghanaians chose John Mahama not Nana Addo, No justice, no peace, stand to be counted” we’re some of the many inscriptions the protesters carried to drive home their resolve and rejection of the announcement by the EC.

Various speakers who spoke at the protestation march reiterated their position not to accept the declaration as it currently was.

Madam Abla Dzifa Gomashie, Member of Parliament elect for Ketu South said a lot of things were amiss with this year’s elections across the country and in her constituency in particular saying, “the election’s not free and fair.”

She blamed the Municipal EC office for deliberately disenfranchising a lot of constituents by way of removing their names from the electoral roll and failing to address challenges people faced during the registration exercise.

Madam Gomashie added that the EC itself had admitted to have some computational challenges with its declaration and called on the Commission to take steps to right the wrongs, while also calling on all well-meaning Ghanaians to impress on the EC to do the right thing and respect the will of the citizenry in the elections.