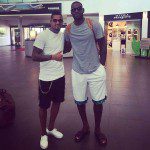 Troubled Ghana midfielder Kevin-Prince Boateng met one of his long-time admirers, NBA super star Lebron James as he struggles to find a club.

Boateng, 27, was introduced to the Cleveland Cavaliers legend as he eases the pressure of finding a new club.

?That moment when you meet a legend!!! he tweeted

The woes of the suspended Ghana international continued last week after he failed a medical at Portuguese side Sporting Lisbon.

Top official of the European side open the lid on the real reasons for the botched move to the club contrary to claims the deal fell through over image right.

Schalke are desperate to offload the former AC Milan, who has been frozen out of the team indefinitely.

He is desperately trying to find a new club with his troublesome knee becoming a source of worry, many clubs are shying away from signing him.

That moment when you meet a legend!!! @KingJames pic.twitter.com/WFf4nZwFkx