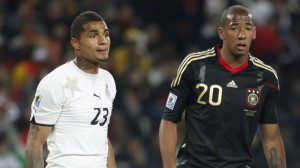 Munich ? A star-studded Germany side full to the brim with Bundesliga stars took an emphatic first step to winning a fourth FIFA World Cup, beating Portugal 4-0 on Monday. However, their next opponent present a challenge in stark contrast to that posed by Crisitano Ronaldo and Co. last Monday.

Up next for Joachim L?w?s men on 21 June (16:00 GMT/18:00 CEST) are Group G opponents Ghana. Accordingly, Bundesliga has gathered all the most interesting statistics ahead of what promises to be another stern test for the Nationalmannschaft?.

Germany and Ghana have only ever played each other twice on the international stage with Germany emerging triumphant on both occasions. Their first meeting, a friendly back in 1993, was played in the German city of Bochum and finished with the home side winning 6-1. The second was a much tighter affair with the Nationalmannschaft grinding out a 1-0 win at the 2010 FIFA World Cup in South Africa during the group stages. The 6-1 win over Ghana back in 1993, was a much more keenly contested encounter than the scoreline suggests. Until the 69th minute, Germany had been trailing 1-0 to the African side, but Germany bounced back in a big way, scoring six goals in the final 21 minutes as Ulf Kirsten, Andy M?ller both found the net, while Stefan Effenberg and J?rgen Klinsmann bagged braces. In 2010 by contrast, was decided by a single goal scored by former SV Werder Bremen midfielder and 56-time Germany international Mesut ?zil. Ghana?s results against European teams during a World Cup have been the definition of average: two wins against the Czech Republic and Serbia balance out the defeats suffered at the hand of Italy and Germany. Kevin-Prince Boateng was surprised to find himself on the bench against the USA, but came off the bench to revitalize his side in the closing half an hour, taking three shots on goal in a dominant performance. Therefore, just like in 2010, it is more than likely that both him and half-brother Jerome Boateng will face off against each other. The German national team should should be well aware they can?t afford to take anything for granted though. The DFB-XI have only managed to win their second game of a World Cup once in five attempts; the 1-0 victory over Poland in 2006 was far from clear-cut.. Mats Hummels would be a huge loss for Germany against Ghana with the defender currently facing a race against time to be fit for the clash. The centre-back injured himself against Portugal, but also scored his sides? second goal whilst winning 75 per cent of his challenges. A win against Ghana would not guarantee Germany their spot in the knock-out stages. However, if the USA beat Portugal the following day, then the German squad can go into their final group game against J?rgen Klinsmann?s troops knowing their spot in the Round of 16 has already been wrapped up.