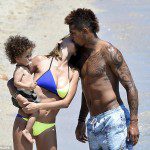 The 28-year-old was pictured on holiday in Porto Cervo, Sardinia on Thursday with his stunning wife Melissa Satter and their one-year-old son, Maddox.

The family looked as though they were having lots of fun on their sunshine break, with the sportsman barely able to keep his eyes? or his hands off his beautiful bikini-clad wife.

As they walked along the beach front together, the couple engaged in a passionate kiss while Melissa held their child in her arms.

She looked incredible in a purple and neon yellow crossover bikini which showed off her incredible post-baby figure.

Kevin-Prince showed off his muscular physique and a variety of inkings as he soaked up the sun with his family.

The rugged sportsman clearly dotes on his little boy and was pictured cooing over him as he picked him up and carried him around with him on the beach.

He appears to be so thrilled to be enjoying his time with his loved ones and even took to his Twitter account to let his followers know what he is up to.

Schalke released Kevin-Prince, Marco Hoeger and Sidney Sam following a poor run of form in May following a winter break which had put their European hopes in jeopardy.

Melissa and Kevin-Prince have been dating since October 2011, before getting engaged in July of 2012.

Their romance began just one month after Kevin?s divorce from the mother of son Jermaine-Prince was finalised.

The sportsman proposed to the multi-talented model in Miami. He presenting her with a multi-million dollar diamond engagement ring from Damiani.

In 2012,  the couple raised eyebrows when they spoke very openly about their sex life, claiming it was what caused the footabller?s minor injuries, which at the time left AC Milan fans very unhappy.

She told Vanity Fair: ?The reason why he is always injured is because we have sex seven to ten times a week.

?I hate foreplay, I want to get straight to the point. My favourite position is on top so I can take control.?

Taliban Declare August 15 Holiday to Celebrate One Year of Rule