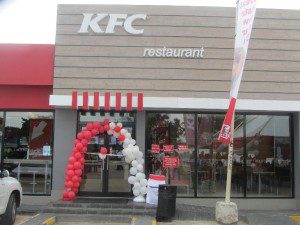 The new KFC restaurant in Kumasi

The Drive-Through restaurant is the seventh to be opened by KFC-Ghana after its flagship restaurants in Accra since 2011, providing ?finger-licking? fried chicken to the Ghanaian public.

Speaking at the ceremony, Mr. Ashok Mohinani, Executive Director of KFC-Ghana, said KFC was introduced in Ghana by the Masco Foods, a subsidiary of the Mohinani Group Company, to give Ghanaians access to the global brand of good quality food.

He stated that chicken was a staple protein source for many people in Ghana and that they had partnered with Shell Oil to offer greater convenience to more people. Mr. Ashok said they had included rice and would soon introduce cassava-based foods into the KFC-Ghana menu to meet consumers? needs and better services.

According to him, the drive-through restaurant, formed part of the Masco food to expand and give the growing consumer class the opportunity of new experience.

Famously founded by Colonel Harlan D Sanders in Kentucky in the 1950s it is known for its ? Finger Licking? Good? slogan.

Mr. Ashok disclosed to Business Day, that KFC had decided to include rice and would soon introduce cassava-based foods into the KFC-Ghana menu to meet consumers? needs as a way of adapting to the Ghanaian food culture, while sticking to standard to ensure better services.

He promised the company?s plan to expand into other emerging markets such as Takoradi, Tamale and Cape Coast to cover the entire nation.