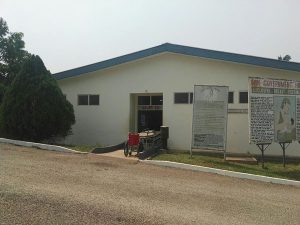 OPD of the Kibi Government Hospital

Mortuary attendants at the Kibi Government Hospital in the East Akim Municipality of the Eastern region have been exposed for engaging in fishy deals by management of the facility.

The conduct of the attendants which has gained notoriety, has led to the transfer of all the being penciled for transfer to other parts of the region ultimatefmonline.com can confirm.

According to management, they have consistently received reports of extortion involving the mortuary attendants who charge patients way above the fixed price before bodies are deposited for preservation.

Despite several warnings, the staff appear reluctant and as a result denigrating the image of the facility with the charging of unapproved fees in the pursuit of their personal interest.

“The official approved fee to be charged is not more than GH¢120.00 but can you imagine operators extort monies up to GH¢1,000.00 from clients with under pretext of keeping their corpse safe” a management member lamented.

Some residents claimed operators even chase them to their houses to demand for extra money.