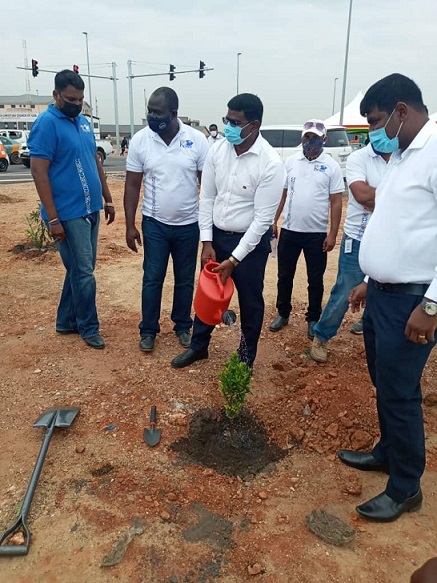 The Kingdom Exim Group of Companies, which operates in Tema has disclosed its intention to initiate and sponsor a greening Tema campaign in support of the nationwide tree planting exercise dubbed Green Ghana.

Mr James Rajamani, Chief Executive Officer of Kingdom Exim Group disclosed this to the Tema Regional Correspondent of the Ghana News Agency following the planting of different species of plants in Tema by officials of the Tema Metropolitan Assembly (TMA), institutions, individuals and schools.

Mr Rajamani said the Company’s initiative would focus on an intercommunity greening campaign to encourage residents of Tema to identify and grow woodlots in their vicinity for aesthetic and recreational purposes.

According to him as part of the numerous projects they had embarked on in Tema as a corporate social responsibility, they believed that the greening project would also be beneficial for the industrial city as it would provide a recreational area for residents while beautifying the place.

He noted that the group would provide the needed logistics and incentives to assembly members to lead their residents to green their areas and the best area would receive a reward.

He indicated that to sustain the project, Mr Immanuel Rajamani, Managing Director of Kingdom Exim will have oversight duty on the campaign and coordinate it to its successful end.

He said they had already planted 500 seedlings in and around the motorway interchange to beautify the area giving the assurance that the plants were being well catered for to ensure the purpose of planting them.

Meanwhile, the TMA under the Green Ghana project is to plant 5,000 plants across the metropolis by the end of the year with a focus of replacing over-aged trees, which roots had been identified by the Assembly to be blocking sewer lines and causing a nuisance to underground service lines.

Mr Felix Mensah Nii Anang-La, Tema Metropolitan Chief Executive said as an industrial area, there was the need to plant more trees to help purify the air residents breathed in as he revealed that most cases seen at the Tema General Hospital were respiratory related.