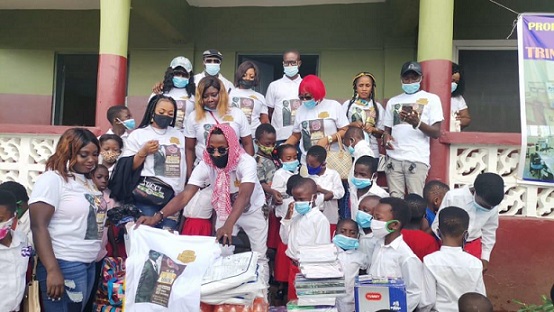 Ghanaian Highlife Legend Kaakyire Kwame Fosu popularly known as “KK Fosu” has made a donation to the Trinity Home Academy in the Akuapem North Municipality.

KK Fosu who turned 40th on Valentine’s Day, February 14, had had an illustrious music career spanning two decades with a number of hit songs to his credit.

The items donated worth GHC 10,000 include bags of rice, cartons of cooking oil, soft drinks, and other foodstuffs.

Speaking in an interview after the donation, KK Fosu said he deemed it necessary to share the special day with orphans in his hometown and also support them with the food items.

“I want to thank God for adding another year to my age and it is a very significant milestone in my life.

“I decided to dine with these young ones and also inspire them considering their situation and also give them these items to support their daily living,’’ he said.

KK Fosu had been touted by many music pundits as one of the greatest hit-makers in the annals of Ghana’s music.